Foreign arrivals to Greece this year are expected to reach, if not surpass, some 16.5 million, the president of the Association of Greek Tourism Enterprises (SETE), Andreas Andreadis, informed Prime Minister George Papandreou during a meeting held in late August.

So far, according to data compiled by SETE from 13 of Greece’s major airports, Greece has experienced a 10.1 percent increase in international arrivals (January-August) compared with the same period last year. For the first eight months of the year arrivals amounted to 8,695,309 tourists, up from 7,897,606 in 2010.

Meanwhile, travel spending by non-residents in Greece grew by 16.7 percent in July, according to data released by the Bank of Greece in mid-September. Tourism receipts for the January-July 2011 period increased by 14.2 percent (5.5 billion euros) compared with the same 2010 period, Greece’s central bank said.

For some time now tourism professionals had estimated a double-digit rate increase (10 to 12 percent) in arrivals along with a rise in revenue after last year’s eight percent drop.

On his part, Culture and Tourism Minister Pavlos Geroulanos marked the progress of tourism and told the Greek press “we have good reason to smile this year, but (we) will not rest on our laurels.

“September and October have become important months for tourism and we want to continue the trend,” he said.

According to the culture and tourism minister, early indications showed that this year’s tourism figures could surpass the best record increases Greek tourism has recorded so far.

In an interview last month, Mr. Geroulanos said 13 percent more tourists chose Greece for their holidays in the first half of the year compared with the same period of 2010. He asserted that past losses from tourism, a result of negative publicity, had been balanced due to the return of tourists from Germany and the UK, while the new markets of Russia, Israel, Serbia and Turkey showed signs of increased traffic.

“While the country’s GDP declined by some seven percent in the first half of 2011, the tourism sector recorded substantial profits,” the minister said.

On his part, Prime Minister George Papandreou gave an optimistic note during his keynote speech at the 76th Thessaloniki International Fair (TIF) in the Greek northern city held 10-18 September when he focused on tourism as one of the country’s sources of growth in the years to come and highlighted that Greece has the means for its tourism industry to become a “champion for growth and development.” 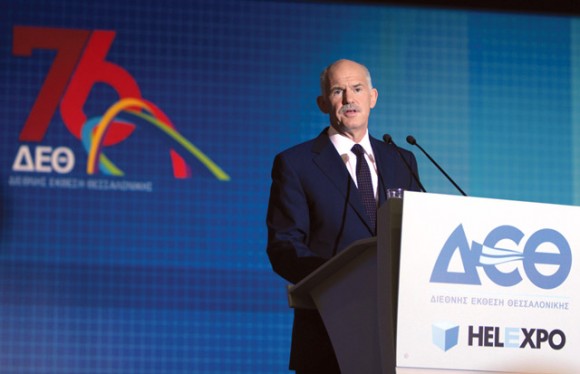 Prime Minister George Papandreou during his keynote speech at the 76th Thessaloniki International Fair. Although Mr. Papandreou referred to tourism in an optimistic manner, press reports by experienced Greek travel trade journalists said the PM’s reference to tourism was “brief” (only one paragraph in his speech) and they questioned the significance and accuracy of the mentioned topics.

“Firstly, tourism should in fact be set as a priority—not just through verbosity—of the government and a stable fiscal framework must be ensured, one that would have a positive impact on businesses and attract foreign investment,” Mr. Drakopoulos told GTP.

During the 76th TIF, the Greek PM was on the same wavelength with Culture and Tourism Minister Mr. Geroulanos as he too gave emphasis on Greece’s new target markets.

He told the audience that the public and private sector “together” turned to new markets such as Russia, Israel, Turkey, Serbia and are expanding them.

Mr. Papandreou said the government was now focusing on new markets such as China and India and aiming for an increase of visitors from the U.S.

In regards to the “public-private sector cooperation,” SETE’s general director said that what is needed is the establishment of a marketing company that would market a brand name for Greek tourism based on a public-private sector partnership. “Discussions on the subject have been made,” Mr. Drakopoulos said.

“This company would format products and implement a branding system for the entire tourism product and then be promoted abroad to specific markets via targeted actions that would emerge following a conducted study,” he said.

In closing his speech, the Greek PM said that if everyone makes one step in contribution to the government’s efforts “then our country will be making ten steps ahead.

“I am asking museum guards and personnel, the taxi owners, port and dock workers to realize they
are more than just average working people,” he said. “They are the image of our country,” Mr. Papandreou added.

According to SETE’s general manager, this year’s tourism season has a “bitter taste” since, although 2011 seems to be closing with a double-digit figure both in arrivals and revenues, the increase could have been greater if mobilizations had not taken place.

However, Greek press articles mentioned that the impact of the events of June (violent street riots) and the three-week taxi strike in July seemed to not have upset arrivals to Greece to the expected extent.

Culture and Tourism Minister Mr. Geroulanos said the impact, if any, of the street riots and the taxi strike would appear in 2012. “This will show towards the end of this year and early next,” he told the press.

According to tourism professionals, the “dramatic improvement” of incoming tourism to Greece was due to the economic recovery of Europe, the riots in North African countries, the decision of hotels to keep prices on competitive levels and also the improvement of the visa procedure for Russian citizens.

Mr. Geroulanos told the press that, according to figures, only three percent of the overall increase of tourism to Greece was attributed to the North African turmoil since the tourist trend to Greece had been on the rise before the turbulence broke out.

Low cost carriers are also said to have been contributing factors to tourism growth in destinations such as Rodos and Kos, as each saw a rise of some 24 percent in arrivals in the first eight months of 2011.

Domestic tourism is expected to show a 20 percent drop this year as the economic crisis and fiscal measures caused Greeks to reduce travel, vacation days and also consumption.

“I believe the reasons for the drop in domestic tourism are obvious and has to do purely with the crisis and the insecurity felt by citizens to spend their money,” the culture and tourism minister said.

Athens Center In The Spotlight