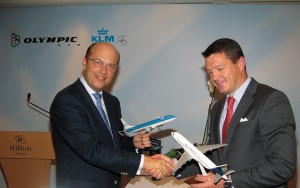 Olympic Air and KLM signed a code share agreement last month that entitled the airlines to market flights between Amsterdam and Athens for connecting traffic under each other’s flight numbers. The agreement enabled Olympic Air to increase the number of daily flight offerings to its customers from 10 to 17 per week. Pictured is John Karakadas, Olympic Air’s executive chairman, and Pieter Elbers, KLM’s chief operating officer, at the relevant press conference held at the Hilton Athens on 16 September.