The Greek tourism sector contributed (directly and indirectly) some 27 billion euros to the Greek GDP in 2010 and could increase that contribution to 45 billion euros annually by 2021 through a series of initiatives and investments, according to the study “Greece 10 Years Ahead” conducted by the Mckinsey and Company consulting firm and presented last month in Athens.

The study, which aims to define a new growth model and strategy for economic development in Greece in the next five to 10 years, focused on the five largest (in terms of gross value added) production sectors of the economy that have significant potential to fuel the country’s economic growth in the coming years: tourism, retailing, energy, industry and agriculture.

In regards to tourism, the study highlighted that it accounts for some 15 percent of the Greek economy when both direct (seven percent) and indirect (eight percent) gross value added contribution is measured.

The Mckinsey study mentioned a series of Greek tourism growth obstacles and proposals to overcome them.

Among proposals made in the study was the development of quality infrastructure while accelerating investments.

“This involves investments in two or three larger-scale conference centers in Athens and Thessaloniki, as well as the development of the necessary infrastructure to support nautical tourism (30-35 additional marinas) and three or four cruise ship-friendly embarkation ports. 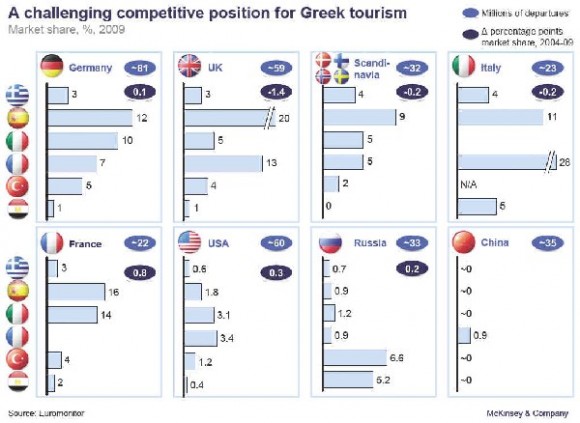 According to Euromonitor, Greece faces a deteriorating competitive position in its traditional markets and has had limited success in attracting visitors from emerging markets such as China and Russia.

Also, policy priorities should revolve around the selective lifting of restrictions and bureaucracy for the construction of tourism residential accommodation and integrated resort development, as well as enable the productive utilization of dormant tourism assets.

According to McKinsey, Greece needs to actively promote better connectivity with emerging and long-haul markets (US, Russia and China) by attracting more direct flights from those source markets, as well as lowering entry barriers (facilitating Schengen Visa processes) and airport charges.

The firm also mentioned that Greece should replan and re-schedule capacity, connectivity and quality/cost offering for island transportation.

“The development of two to three local hubs (e.g. in Cyclades, Dodecanese, Ionian islands) should also be considered,” the study said.

McKinsey analysts pointed out that Greece faces a deteriorating competitive position in its traditional markets and has had limited success in attracting visitors from emerging markets so proposed in the study was for Greece to redefine and refocus its commercial strategy.

The commercial strategy should also aspire to shift the mix of visitors towards higher-income segments through a quality upgrade of the core ‘sun and beach’ product with specific extensions—in developing cruises and nautical tourism, developing a network of large integrated resorts (15-20) and tourism residential accommodation (some 50,000) and establishing Athens and Thessaloniki as attractive “city break” destinations

The study underlined that Greece’s tourism season is excessively concentrated in the summer months (52 percent of arrivals occur during the third quarter) and tourists spend relatively less money there than travelers visiting competing destinations (146 euros/day in Greece against 200 euros in Italy and 162 euros in Turkey).

“Greece offers a ‘sun and beach’ product with broad mass-market appeal, yet with low average quality and very limited differentiation in ‘themes,’” the study said. McKinsey analysts commented that the Greek tourism product has a doubtful economic viability in the absence of large-scale accommodation and high value added infrastructure.

In terms of professional capabilities and expertise, the study found that Greece lags behind in talent quantity, quality and status of academic institutions.

Also mentioned was Greece’s lack of an effective market-driven organization for managing and promoting its tourism product abroad.

According to Mckinsey, by 2021 the direct and indirect contribution of tourism could increase (vs. 2010) by some 18 billion euros and employment could increase by approximately 220,000 new job positions.

The “Greece 10 Years Ahead” study was prepared at the initiative of the Hellenic Federation of Enterprises (SEV) and the Hellenic Banks Union.