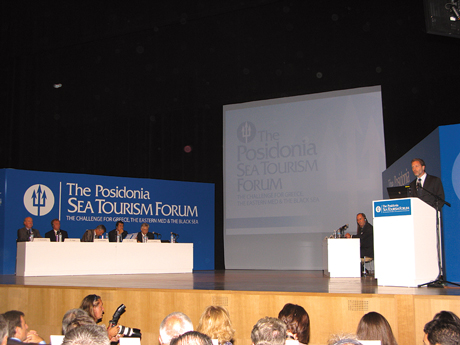 “Cruise tourism is a key to the government’s overall policy,” Culture and Tourism Minister Pavlos Geroulanos said during his opening speech at the first Posidonia Sea Tourism Forum held at the Onassis Cultural Center in Athens on 21-22 June.

The culture and tourism minister stressed the Greek Government had already taken steps to upgrade and boost sea tourism in Greece, “but a lot still has to be done.”

Mr. Geroulanos added that the lifting of cabotage restrictions in the Greek cruise industry has already brought positive results with the increase in the number of cruise ships calling in Greece.

Pierfrancesco Vago, vice chairman of the European Cruise Council (ECC) and CEO of MSC Cruises, during his presentation, welcomed the lifting of cabotage restrictions in Greek waters but said the current conditions of the contract cruise companies are obliged to sign with the government in order to homeport in Greece discourage cruise operators.

According to the data, Greece had replaced Finland and was in the top six European Union countries in terms of cruise industry revenue.

The data also showed that there were almost 4,5 million passenger visits to Greek ports in 2010 (nearly 20 percent of the total E.U. market).

However, according to Mr. Vago, the proposed cabotage legislation, the proposed increases in fees and levies well above inflation, the need for improved safety measures and sensible berth allocation policies are key issues that could threaten the industry’s development and have a strong counterproductive impact on both cruise tourism in Greece and the wider Greek economy.

In respect of fees and charges Mr. Vago said they must be reasonable otherwise cruise companies would be forced to move their ships elsewhere.

“The proposed fee per passenger for 2012 (3.95 euros), for instance, corresponds to an increase of more than 300 percent,” he stressed. 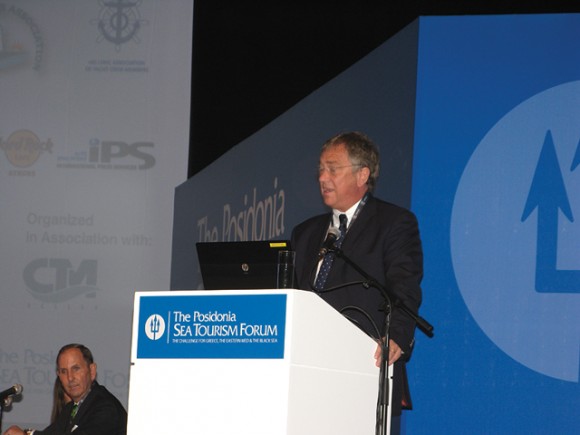 Τhe signing of the infamous three-year contract the Greek Government holds as a condition for non E.U. cruise ships to homeport in Greece was mentioned on many occasions during the Posidonia forum. Pierfrancesco Vago, ECC vice chairman, urged the Greek government to resist “inward looking and protectionist policies” that could discourage cruise lines from calling. Recent press reports said that Deputy Development, Competitiveness and Shipping Minister Haris Paboukis is considering scrapping the contract completely in September as too much time has been lost on the matter.

On his part, Gianni Onorato, president of Costa Crociere, said the lack of infrastructure at Greek ports, especially to handle large vessels, have to be examined.

According to Mr. Onorato, berthing on a “first come first served” basis has to be abolished, as “you can not have captains of large ships racing to get a berth.” Greece is the only country in Europe with such a berthing system.

Today the only active Greek cruise company is Louis Hellenic Cruises and according to Louis Group’s executive chairman, Costakis Loizou, operating in the country is a “complex business” since the status quo is confusing and negative.

Mr. Loizou told the audience that until 2005 there was no Greek flag cruise ships or homeporting ships.

In 2005 and based on the “Kefalogiannis Law” Louis made an agreement with the Greek Government to fly the Greek flag under the condition that the state cover a sum of the pension fund contributions for the Greek crew. However, the Greek Seamen’s Pension Fund (NAT) claimed to not recognize the specific law and took legal action against Louis Cruises demanding five-years worth of contributions (some 15 million euros).

“Today we are operating out of Piraeus with two Greek flag ships and still do not know what the law is,” Mr. Louizou stressed.

The president of the Hellenic Chamber of Shipping, Yiorgos Gratsos, began his presentation by saying “shipping within Greece is inefficient, uncompetitive and withers because of government interventions.”

During his presentation, Mr. Gratsos gave insight on how Greece could become a home-porting hub and said the law that defines the contract should be corrected to represent European practices.

He also referred to port safety and said the International Ship and Port Facility Security code regulations must operate properly. “Incidents like those against the Zenith in 2010 and the two cargo passenger RoRo ships in Corinth in 2010 and 2011 must be eliminated,” Mr. Gratsos said.

The second day of the Posidonia Sea Tourism Forum began with a discussion on Greek yachting.

According to George Vernicos, secretary general of the Association of Greek Tourism Enterprises, yachting could show the many good things of Greece during this time of crisis but political leadership and a policy that encourages growth are necessary.

“Laws governing yachting are outdated and confusing and constantly changing as they are continually amended through a series of decrees,” Mr. Vernicos said during his speech.

Mr. Vernicos added that some 80 percent of the yachts based in Greece at the time of the Athens Olympics 2004 relocated to Croatia and Turkey, two countries that “have recognized the potential of sea tourism.” 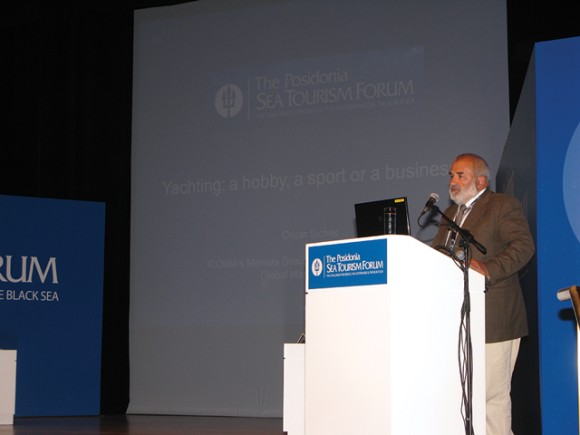 The second day of the Posidonia Sea Tourism Forum lacked the presence of a government representative in the audience and left a bad impression on the forum’s foreign speakers. “There have been some 27 speakers, many of them from abroad, and any government people who attended left after 20 minutes and did not hear what was discussed and this is very sad,” said Oscar Siches who manages marinas in Mallorca, Spain.

Antonis Stelliatos, president of the Hellenic Professional Yacht Owners Association, said there are 3,500 private and professional Greek flag yachts and that Greece is losing the opportunity to become the center of sea tourism.

“Competitors like Turkey do not need three or four ministries to get involved in simple decision making regarding an issue concerning a marina,” the association’s president said during his speech.

Mr. Stelliatos said that bookings of crewed professional yachts had dropped by more than 80 percent in 2010 against the previous year.

According to the speakers of the panel, the lack of political will was costing Greece in lost revenue from sea tourism. All speakers agreed on the need for a stable government policy on yachting and marinas, and called for yachting and sea tourism to be included in the wider maritime policy.

However, as pointed out by the speakers themselves, there was no government representative present in the large audience.

It should be noted that at the end of the first session of the forum’s second day, the audience stood in protest at the seemingly lack of Greek government interest in yachting and sea tourism in general,  with several of the international speakers calling on the forum’s organizers to draft an official letter of protest and disappointment and send it to the government.

The second Posidonia Sea Tourism Forum will be held in June 2013.