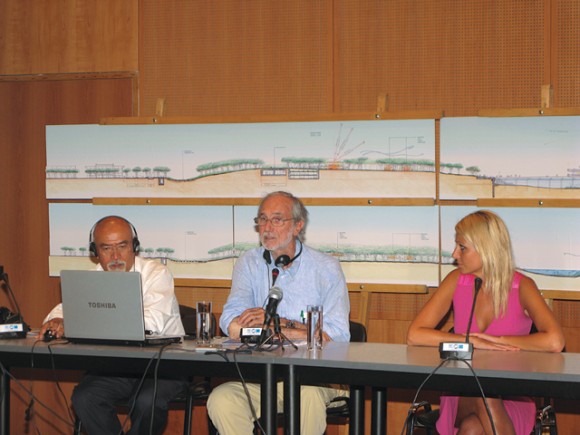 Italian architect Renzo Piano (center) presented the final architectural plans for the development of the Faliro Delta to the Greek media last month. The project’s budget was said to be some 200 million euros covered by the Greek Environment, Energy and Climate Change Ministry’s program “Athens-Attica 2014.” The Stavros Niarchos Foundation funded the master plan of the park with four million euros.

“This park will become a new destination in the city,” renowned architect Renzo Piano said while presenting the final architectural plans for the development of the Faliro Delta in late June to the Greek media. The plans were funded by the Stavros Niarchos Foundation.

The project will see the creation of the largest park in Athens and will connect Moschato and Kalithea with the sea and break the obstacle of the highway and tramline that cuts off the city.

The project will begin at the end of the year and should be completed by 2015.

Mr. Piano was chosen in February 2008 to design the Stavros Niarchos Foundation Cultural Center at the Faliro Delta that includes the National Library, the National Opera House and a cultural park.

The cost of the design, construction, and equipping of new buildings for the library and the  opera house are being funded by the Stavros Niarchos Foundation with 566 million euros.

Hotel Chamber Goes On The Air With Tourism Message