“The effort to promote Athens in the conference market will only succeed with the full cooperation between the public and private sector with no exceptions,” Rob Davidson from the University of London and Greenwich told the audience at the Athens Convention Bureau’s second “ACB event” that took place late June at the Byzantine and Christian Museum in Athens.

Mr. Davidson noted that with the creation of ACB, Athens has taken an important first step, but falls short in other areas as the city lacks a large conference center and reliable statistical data.

According to Mr. Davidson, the crisis has led conference organizers to change their policy, as today they are characterized by tough negotiations on costs and benefits and pressures for risk-sharing in the success of an organization.

The bureau launched the “ACB Events” program in October 2010 aiming to develop the conference product of Athens. 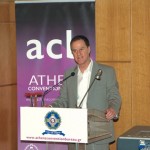 Rob Davidson from the University of London and Greenwich speaking at the Athens Convention Bureau’s second “ACB event.” 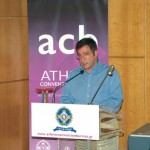 Athens Mayor Yiorgos Kaminis presented ACB’s action plan and gave insight on the position and prospects of Athens in the international market of conferences and corporate meetings in light of the recent trends and developments.