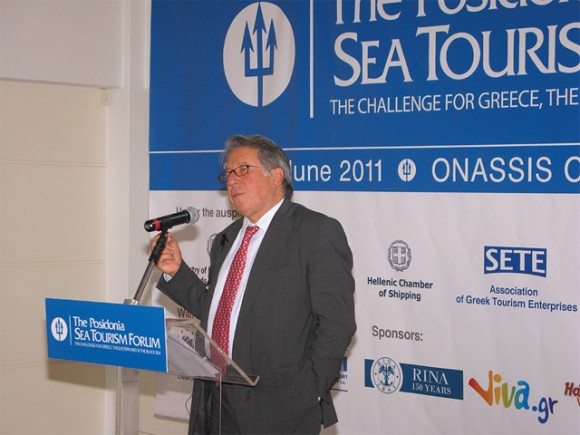 Hellenic Chamber of Shipping President Yiorgos Gratsos speaking at a press conference last month held prior to the 1st Posidonia Sea Tourism Forum. At the time of the press conference, it was mentioned that a draft law prepared by the former Maritime Affairs, Islands and Fisheries Ministry—aimed to develop marine and fishing tourism—was scheduled to be tabled in Parliament. However, due to a government reshuffle on 17 June 2011 and the abolishment of the specific ministry, it now remains unclear if and when this would take place. The abolished ministry’s responsibilities have been assigned to the Regional Development, Competitiveness and Shipping Ministry.

“Greek legislation and bureaucracy kill the cruise market and maritime tourism,” the president of the Hellenic Chamber of Shipping, Yiorgos Gratsos, said at a press conference last month, held prior to the 1st Posidonia Sea Tourism Forum.

During his opening speech, the chamber’s president appeared quite outspoken as he touched a series of issues that resulted in a round of applause from the audience. 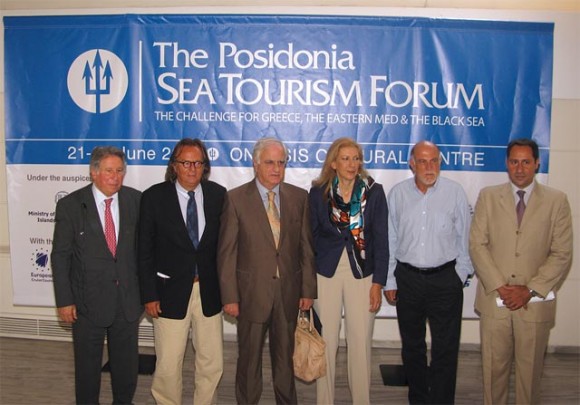 Key figures of Greek sea tourism at the press conference prior to the 1st Posidonia Sea Tourism Forum.

Mr. Gratsos underlined that the Greek Government must understand that no large international cruise company would sign the required three-year contract in order to homeport at a Greek port and called for its revision. “They will simply work with neighboring countries, Greece’s competitors,” he said.

On the issue of Greek ports, Mr. Gratsos stressed that if order is not imposed in the ports “we ourselves are throwing money away.

“Greece is a desirable destination, but the country’s ports do not even comply with the security regulations of the International Ship and Port Facility Security (ISPS),” Mr. Gratsos said.

In regards to Greek professional yachts, Mr. Gratsos noted that they must become more competitive or else the foreign yachts that sail the Greek seas to their homelands would multiply their benefits. “So Greece will lose significant revenue in the same way it is losing revenue from cruise ships,” he said.

Spa And Wellness Tourism Lag Behind In Greece