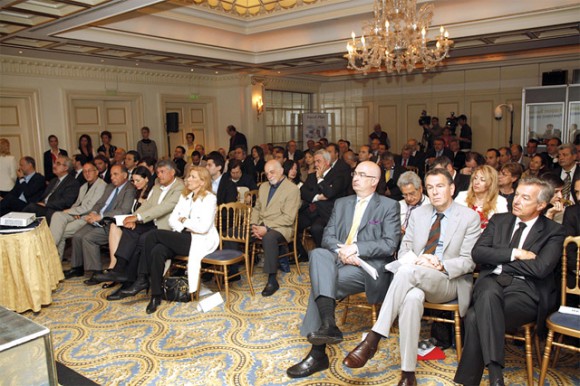 The opportunities and challenges of low cost carriers in Greece were focused upon at the open discussion “Aviation and Tourism,” hosted by the Hellenic Chamber of Hotels.

The Hellenic Chamber of Hotels hosted an open discussion recently and gave tourism professionals the chance to analyze opportunities and challenges posed by low cost carriers in Greece.

The open discussion entitled “Aviation and Tourism” was the first part of a series of thematic discussions on Greek tourism the chamber has launched and included speakers from the international aviation scene who debated on the benefits of the operation of low cost carriers.

According to David Bell, senior consultant of UBM Aviation ASM, low cost carriers do deliver passengers to destinations but in order for them to see the return of investment they expect, a low cost base is required.

Mr. Bell said Greece is perceived as a high cost market due to airport charges and taxes while it should be competing with traditional leisure destinations such as Spain and Portugal and new markets such as Morocco and Croatia. “The competition is benefiting, so should Greece,” he said.

“Low cost carriers are not ‘gods from a machine,’ but they can contribute to specific Greek markets,” according to Yiorgos Karamanos, vice president corporate marketing and communications in Abu Dhabi Airports Company.

Through his presentation, Mr. Karamanos referred to the “truths and myths” that surround the concept of low cost carriers.

Mr. Karamanos said it is a fact that low cost carriers create new markets and for the past decade have been the catalysts of aviation growth in Europe.

He added that low cost carriers do contribute to the economic and tourism development of destinations and airports and offer competitive prices and optional services.

However, Mr. Karamanos said the beneficial effects of low cost carriers are not evident in all  airports, nor are such airlines committed to their development programs. 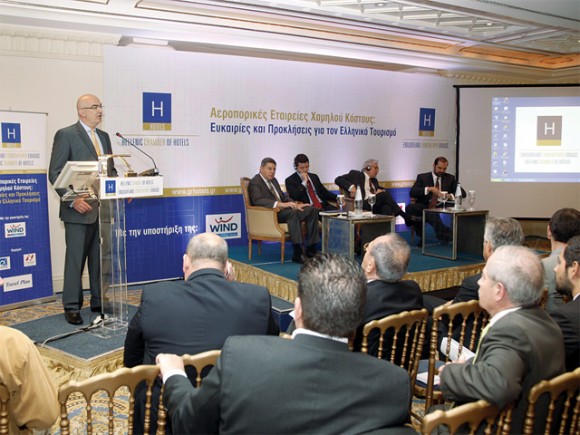 President of the Hellenic Chamber of Hotels Yiorgos Tsakiris opened the chamber’s discussion entitled “Aviation and Tourism.” During the discussion it was mentioned that the suspension of airlines’ slot fees at Greece’s regional airports (except the Athens International Airport) would expand for 2011. It was also announced that the legislative framework for seaplane operations and waterway access in Greek waters (that would ensure the development of air services on a sustainable basis) was near completion.

He also stressed there is no proof that passengers of such airlines spend more money at airports and destinations just because they pay cheaper airfares.

In closing his presentation, Mr. Karamanos said low cost carriers contribute to an increase in passenger traffic but not necessarily long term.

Wolfgang Kurth from Advolar, a company that comprises solutions for enterprises in the transport, aviation and tourism industry, made propositions on the best operation model for Greece in regards to low cost carriers.

“Hotels and/or destinations may encourage a cooperation between low cost carriers and tour operators, but that’s a cumbersome job,” he said.

Mr. Kurth said a balance between low cost carriers and tour operators must be kept.

“Tour operators are afraid of being eliminated from the value chain,” he said.

In regards to the strategy tourism destinations should follow in their approach to low cost carriers, Mr. Kurth said airports and destination management should join forces.

According to recent reports, the largest increases in foreign flights among the 23 Greek international airports this summer appeared at airports where low cost carriers operate.

The increase of low cost carrier flights, the low prices of hoteliers and the unrest in the countries of North Africa are three main reasons Greek tourism is believed to increase this year, the Greek press said.

Spa And Wellness Tourism Lag Behind In Greece