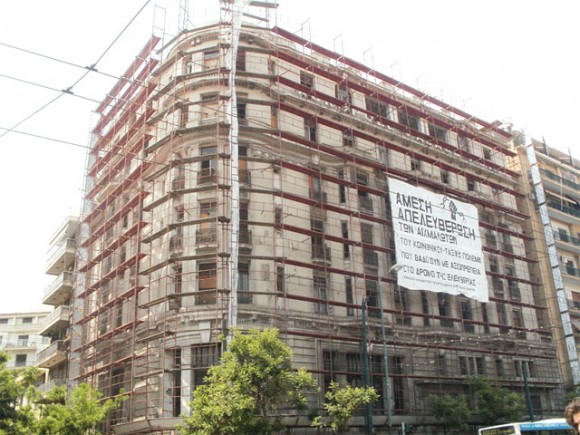 The Culture and Tourism Ministry said it would renovate and transform the closed down hotel Acropole Palace (451 Patision and Averof Streets) into a cultural center in an effort to improve the National Archaeological Museum area in downtown Athens. In 1990, the Acropole Palace (today a listed building) was characterized by UNESCO as “a shining example of ArtNouveau architecture in Europe.”

Prime Minister George Papandreou chaired a Cabinet meeting last month after a week of street violence occurred in an Athens city district and announced a series of measures aimed to revamp the Greek capital’s historic center.

According to reports, measures announced by the PM include increased police patrols in the city center, intensified checks in degraded areas, creation of detention areas for illegal immigrants and a plan for their deportment, economic measures to restore abandoned buildings and the transfer of the drug rehabilitation center OKANA to hospitals.

On its part, the Culture and Tourism Ministry, during the Cabinet meeting, announced actions to strengthen the cultural, historical and modern identities of the city of Athens.

The ministry said its plan was to promote Athens as a tourism destination as part of Greece’s overall communication strategy as a country.

On the Municipality’s side, while chairing a council meeting last month, Athens Mayor Yiorgos Kaminis submitted recommendations on the historic and commercial center of Athens. “The Municipality is focusing on developing city tourism,” he said.

Mr. Kaminis also recently announced the establishment of a Municipal Committee for Athens Tourism with the participation of the Culture and Tourism Ministry, the Attica Prefecture and all tourism agencies.

Meanwhile, the mayor will visit Israel in mid-June, accompanied by travel agents, where agreements will be signed to encourage tourist arrivals from Israel to Athens.