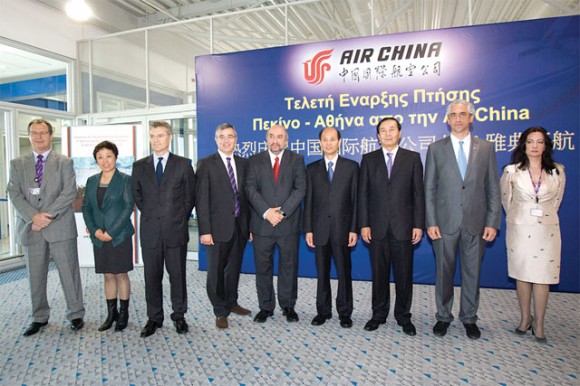 At a ceremony after Air China’s first flight to Athens International Airport from Beijing, Deputy Culture and Tourism Minister George Nikitiadis (center) said he was sure the flight would become a “direct, non-stop, seven days a week flight.”

Air China launched a new route between Beijing and Athens via Munich on 18 May in an attempt to strengthen ties on tourism and business.

Air China’s Beijing-Munich-Athens route has flights every Wednesday and Saturday and is serviced by Airbus A330. The trip’s duration is 13 hours and 25 minutes.

Greece also signed a joint statement with China for facilitating the issuance of visas to each other’s citizens.

The capitals of Greece and China are connected again following a two-year break in operations due to the global economic crisis.

Plan For No-Frills Airlines To Fly From Tripoli