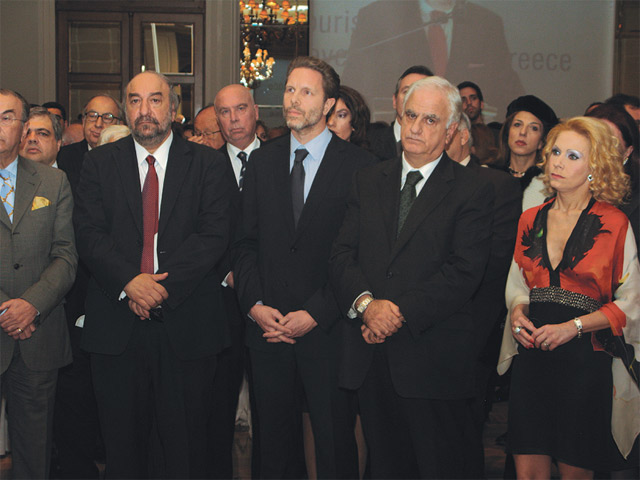 At a joint press conference with Maritime Affairs Minister Yiannis Diamantidis (first from right) at the Seatrade Cruise Shipping Exhibition in Miami, Deputy Culture and Tourism Minister George Nikitiadis (left) underlined that Greek ports are ready to constitute a base for the departure and arrival of non-E.U. flag cruise ships. They are pictured here with Culture and Tourism Minister Pavlos Geroulanos at a past event.

The required three-year contract international cruise companies are required to sign with the Greek Government in order to homeport at a Greek port is a “written declaration of cooperation” that may be terminated at any time without any penalty, Maritime Affairs Minister Yiannis Diamantidis recently explained in a press release.

Tourism professionals have been wondering for some time where exactly Greek cruise is headed as, even though the government lifted the cabotage restrictions for non-European Union flag cruise ships, cruise companies are hesitant to make deals.

According to the Greek press, this is due to unclear points in the new law that includes the obligation of companies to sign a three-year contract with the state – a condition that does not apply in any other European country.

Speaking to the press on the outcome of meetings held in March at the Seatrade Cruise Shipping Exhibition in Miami, US, Mr. Diamantidis said he hoped the government’s measures for international cruise companies would come into effect as of 2013.

However, tourism professionals and the Greek media seem sceptical, as despite the optimism of the maritime affairs minister, not one international company has signed the infamous contract with the Greek state to homeport in Greece.

If cruise companies do in fact take advantage of the lifting of cabotage restrictions in Greek waters, reports say Greece should expect an extra one billion euros a year in revenue from tourism.