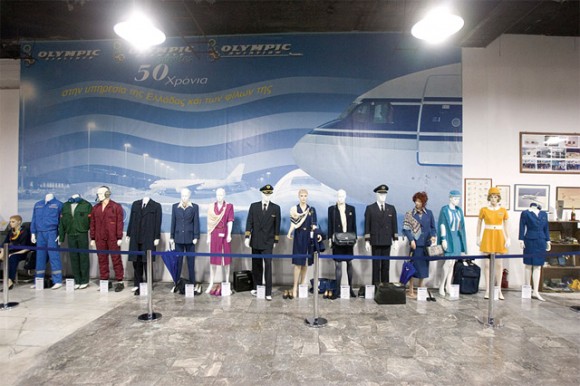 A small display of past Olympic Airways crew and ground staff uniforms at the event held at the Olympic Airways Workers’ Cultural Center. According to the cultural center, over 10,000 exhibit pieces of the country’s aviation history exists. In 2009 the center submitted documentation to the Finance Ministry to set up a public benefit foundation under the title “Aviation Museum.”

The Olympic Airways Workers’ Cultural Center held an event last month and aimed to show the necessity of establishing an Aviation Museum in Greece.

The event, held at the center’s headquarters at the former western airport at Hellinikon on 6 April, coincided with the first day of operation of Olympic Airways in 1957; the 80-year anniversary of Greece’s entrance in commercial aviation and the 10-year anniversary of the Greek airport’s relocation to Spata under the name Eleftherios Venizelos.

During the event, which attracted some 2,000 guests, exhibits of Greece’s aviation history were on display that included aircraft of the fleet of Olympic Airways.

Leave a Reply to someone Cancel reply