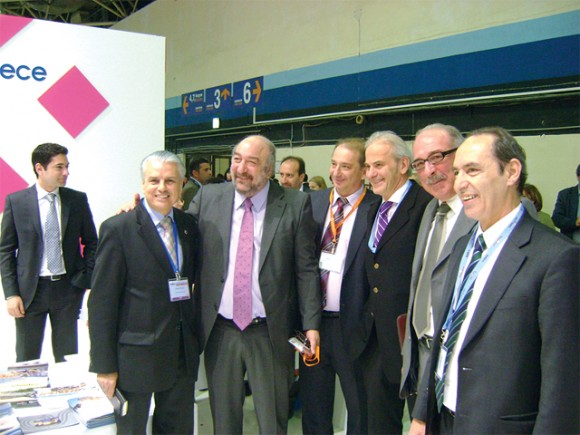 At the 18th MITT exhibition Russian tourism professionals told Deputy Culture and Tourism Minister George Nikitiadis (second from left) that until March a significant increase in bookings to Greece had been recorded compared to 2010.

The Greek Government has undertaken extensive initiatives to facilitate the arrival of Russian tourists to Greece and visitors from countries such as India and China, Deputy Culture and Tourism Minister George Nikitiadis said at the 18th Moscow International Travel and Tourism (MITT) exhibition that ran 16-19 March.

During the inauguration of the Greek National Tourism Organization’s stand at the 18th MITT, Mr. Nikitiadis referred to Greece’s initiative to host an informal summit of European Union tourism ministers on the island of Rodos this summer. The summit is planned to focus on the removal of obstacles that thousands of tourists from non-Schengen countries face when they try to obtain a visa to visit Europe.

The informal summit will be co-organized by the Hungarian Presidency and the European Commission will be invited along with the tourism ministers from China, Russia and India.

“The aim of the summit is for the ministers to accomplish a common decision that would have great importance for tourism in Europe,” the deputy minister said.

According to data from leading travel agencies, it is estimated that this year Greece is expected to record a significant growth from the Russian market.

Greek efforts to further facilitate the easier visa issuance for Russian citizens include the establishment of a pilot consular office in Novosibirsk. Based on the results of Novosibirsk’s operation, other corresponding offices in other cities of Russia that lack a consulate would be created.

In regards to the issuance of multi-entry visas to Greece from Russia, Mr. Nikitiadis said that the plan was in progress.

Mr. Geroulanos had recently said that last year Greece saw a 55 percent increase in the issuing of visas from Russia, while the number of arrivals at airports increased from some 250,000 in 2009 to some 415,000 during the first nine months of 2010.