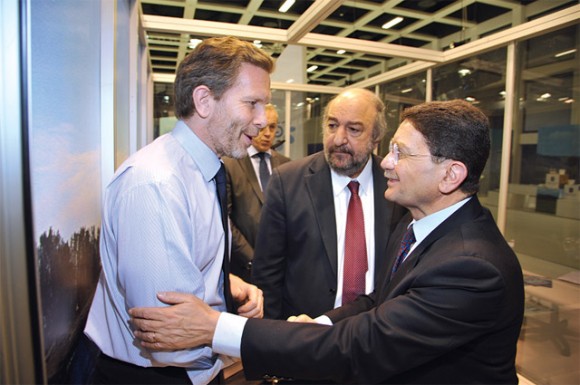 Deputy Culture and Tourism Minister George Nikitiadis (center) looks on as UNWTO secretary-general Taleb Rifai (right) congratulates Culture and Tourism Minister Pavlos Geroulanos for his reply when asked how the North African turmoil crisis affects the tourist flow to Greece. Mr. Geroulanos had stressed that no one should rush to gain benefit from the misery of others and that Greece should not invest in coincidental situations but in long-term policy.

The political turmoil in Egypt and Tunisia may give Greece a 10 percent increase in tourist arrivals this year, the president of the Hellenic Federation of Hotelier’s, Andreas Andreadis, told Bloomberg last month.

“Early bookings for the spring and summer season from the UK, which accounted for 14 percent of the 15 million tourists that visited Greece in 2009, are 10 percent higher than a year earlier,” Mr. Andreadis said.

The federation’s president added that German reservations were up as much as five percent while Russian bookings increased some 20 percent.

On his part, Deputy Culture and Tourism Minister George Nikitiadis told the Greek press that Greece does not expect anything special from the crises in the Middle East region since “no crisis in the neighborhood could ever be a good sign.”

GNTO President Nicolas Kanellopoulos followed the same line as, during a recent press conference in Athens, he underlined that Greece does not rejoice in the misfortune of a neighbor.

Additionally, the French press said that France, Spain and Greece are the “big winners” from Tunisia’s unrest.