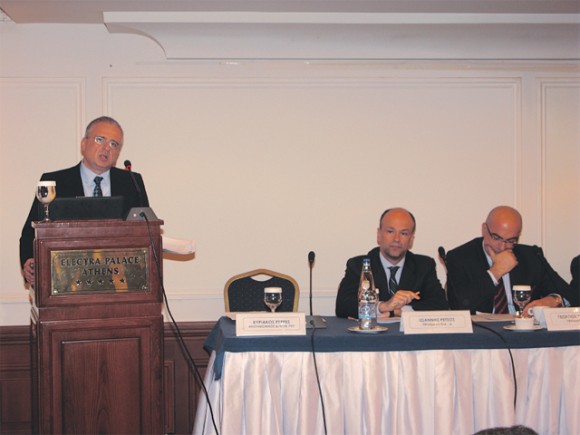 Yiannis Retsos, president of the Athens-Attica Hotel Association and Yiorgos Tsakiris, president of the Hellenic Chamber of Hotels (right) listen to Dr. Kiriakos Reres of the Research Institute for Tourism during the presentation of the institute’s study on the ghettoization of part of the historic center of Athens. ITEP’s survey analyzed the successful “zero tolerance” policy implemented in New York City by NY Mayor Rudolph Giuliani. The policy brought NYC’s crime rate down to record lows.

The Research Institute for Tourism (ITEP) recently presented its latest study on the ghettoization of part of the historic center of Athens and its consequences on the economic life of the city during an event organized by the Hellenic Chamber of Hotels.

The study focused mainly on the one end of the historic center, the Omonia Square area, which has gained a reputation of a haven for illegal immigrants, drug dealers/users, prostitution, street muggings and the sale of counterfeit merchandise.

According to the study, the annual losses of the Greek government from illegal or unlawful activities in the historic center has reached 450 million euros.

Data showed that over the past two years, centrally located shops lost some 25 percent of their customers while turnover fell by 31 percent.

The analysis of the data showed that turnover of the shops in downtown Athens during the first half of 2010 decreased by 25 percent (reduction in turnover for shops located throughout the remaining of the Attica basin is 11.1 percent and 7.5 percent in other major cities).

In regards to the hotel sector, the biggest problem was marked in high category hotels. Luxurious units located in Omonia were forced to drop their prices by 52-62 percent—lower than hotels of the same category in other areas of Attica.

The study highlighted that over time and with the worsening of safety issues in the city center, the area’s tourism image and the hotels that operate in the specific zone would be compromised. Of the 490 hotel units in Attica, some 110 are located in Athens within the boundaries of the area that has experienced the ghettoization phenomenon.

“This will cause the underperformance of hotels and if immediate steps are not taken to restore law and orderliness in the city center, dozens of units will soon close down,” the report highlighted. Already, during the past months, nine hotels in Athens center ceased operations due to low bookings and the impact of the economic crisis.

ITEP listed a series of proposed measures for the immediate upgrading of the historic center of Athens that included the systematic and continuous patrol of downtown Athens by a Hellenic Police special unit for the city center.

According to ITEP, in 2009 over 20 percent of the immigrants in Greece were responsible of crime.

The mayor spoke of the risk of many districts in Athens becoming “inaccessible” and proposed short-term measures, such as the transformation of closed hotels into student halls of residence and providing incentives for young couples and businesses to return to the city center.

On the contrary, five-star hotels in Athens and Attica achieved an occupancy increase of 3.8 percent.

Domestic Tourism Down In 2010