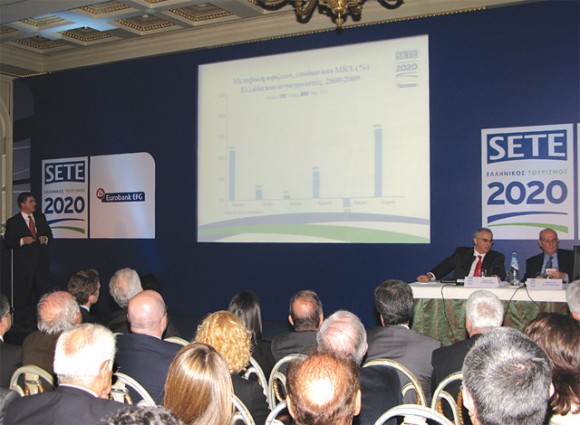 “The proposal for a new development model for Greek tourism is basically a policy proposal primarily aimed at bringing about a major mentality change,” President of the Association of Greek Tourism Enterprises (SETE) Nikos Angelopoulos said at the presentation of the “Greek Tourism 2020 – Proposal for a new development model” study last month in Athens.

According to SETE, the initiative aims for the state to realize that tourism is a fundamental sector of the economy.

The association’s study outlines the framework and guidelines of the new model for tourism by analyzing the development aspects of Greek tourism for the next decade.

According to Mr. Angelopoulos, the new development model for tourism requires the re-establishment of an independent Tourism Ministry, which the government replaced in 2009 with a culture and tourism ministry.

SETE’s president once again insisted that a permanent secretary general for tourism (or one that would serve a minimum five-year term) is necessary in order to maintain consistency and coherence in tourism policy.

He also suggested that the coordination of the ministries jointly involved in tourism to be conducted directly through the Prime Minister’s office.

During his speech, Culture and Tourism Minister Pavlos Geroulanos did not refer to any of SETE’s requests but said the association’s study came at a very important moment. He said the government was ready to carry out major tourism policy changes that the sector requires.

During the presentation of the study’s results and proposals, SETE’s general director George Drakopoulos referred to the over-concentration of supply with 65 percent of hotel beds concentrated just in four regions (Central Greece, Crete, the Dodecanese and Macedonia).

Another main point of the study was the intense seasonality of demand with 50 percent of arrivals occurring almost exclusively during the three-month summer period.

The study also showed that the overall performance of Greek tourism over the last three years has not exceeded 80 percent of its capacity. Meanwhile, the oversupply of hotel beds in Greece had reached 400,000 beds.

Mr. Drakopoulos underlined the changes the tourism demand has undergone over the past 20 years and said it was necessary to serve it with new marketing and administration structures.

The study showed that the new development model for Greek tourism requires the constant monitoring of the markets with specialized think-tanks and the replacement of ineffective promotion tools through online marketing.

Of major importance also are strategic alliances with airlines that schedule direct flights to Greek destinations.

Also, in contrast to the belief that the Greek tourism policy must go beyond its “sun and sea” reputation and focus on other forms of tourism, the study showed that “sun and sea” is in fact the country’s most important product. (Many times tourism professionals and key tourism figures have said that the “sun and sea” model must change, as Greece is more than just nice weather and beaches.)

“Greece’s ‘sun and sea’ reputation must be preserved by upgrading its quality and improving its value for money in combination with the development of other forms of tourism,” the association’s general director said. “The product (sun and sea) is there and it is beautiful but it must be upgraded,” he stressed.