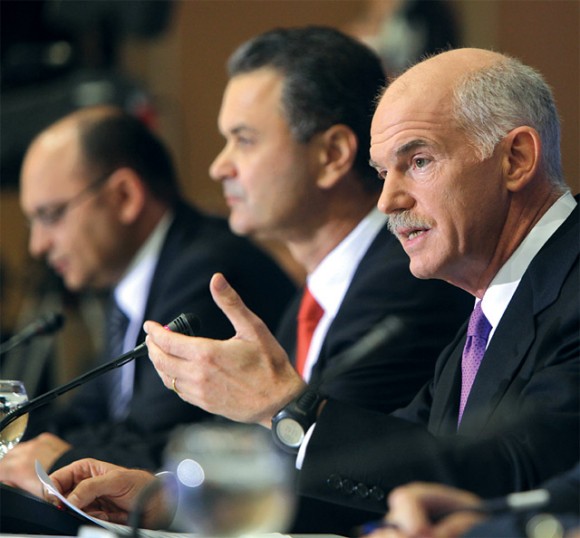 “For the first time in years Greece will continue from where the Olympic Games left off and give Greek tourism a perspective,” Prime Minister George Papandreou said during his keynote speech at the annual Thessaloniki International Fair. Tourism professionals, however, expressed disbelief in regards to how serious tourism is taken by the Greek government. Photo: www.papandreou.gr

“Greek tourism has been switched to autopilot and left unattended, something that was obvious at this year’s Thessaloniki International Fair (TIF)… We did not hear that Greece would carry out what its competitors are im­plementing, whether that be a promotion campaign or the reduction of the Value Added Tax on tourism services,” President of the Pan-Hellenic Federation of Tourism Enterprises (GEPOET) Marios Trivizas said.

Last month, Prime Minister George Papandreou was expected to refer to crucial topics of the tourism sector during his keynote speech at the annual TIF (11-19 September).

However, according to press reports, tourism professionals were disappointed and even frustrated by the PM’s speech, as “he did not refer to tourism as much as he should have.”

During the recent months, tourism professionals have been worried in regards to a rumored VAT hike on tourism services and concerned about the recent figures of this year’s tourism revenue that were far from encouraging.

Through his keynote speech this year at the TIF, PM George Papandreou stressed that the Greek Government has averted the country’s bankruptcy through the 110 billion euro loan from the International Monetary Fund, the European Commission, and the European Central Bank.

In regards to Greek tourism, the Greek PM spoke in an optimistic tone and referred to the cooperation between the government and the tourism agencies.

“This year, despite the difficult conditions Greece experienced, the negative impact on tourism was toned down as for the first time the government worked very closely with tourism professionals,” Mr. Papandreou said.

“Together we passed through obstacles and gave a perspective… Together we will design and implement programs to promote Greece in every country depending on the preferences of the people who live there,” he said.

Prior to the prime minister’s speech at the TIF, President of the Association of Greek Tourism Enterprises (SETE) Nikos Angelopoulos had told the press “the government should take tourism more seriously.”

SETE has continuously made proposals to the government for a targeted promotion campaign to countries abroad and has underlined the importance of cooperation between the government and the private sector on tourism issues.

When asked by GTP which of SETE’s requests does he believe the government would implement, Mr. Angelopoulos said that Mr. Papandreou’s announcements did not necessarily guarantee implementation.

“So what we think or what we want are not enough to ensure a better tourism future,” he said.

In regards to the government collaborating with the private sector on tourism issues, SETE’s president said that cooperation must be based on the formulation and implementation of a policy for the benefit of the economy and not be interpreted as a way to meet demands.

On the other hand, according to the President of the Hellenic Association of Professional Congress Organizers (HAPCO) Dinos Astras, the government, in cooperation with tourism agencies and professionals, has made efforts to address the problems of tourism, sometimes with positive and sometimes with negative results.

“However, the important fact is that substantial efforts have been made, though with a delay in some cases,” he told GTP.

HAPCO’s president underlined that for the first time the government, through its representatives in the tourism sector, has recognized the importance of tourism and particularly the role conference tourism has on the national economy.

On his part, GEPOET’s Marios Trivizas highlighted that the issue is not in regards to the capabilities of the culture and tourism deputy minister or the GNTO president, “who both are cooperative and see the problems, but can hardly do anything because others decide on the funds our country needs for a serious tourism promotion.

“The Finance Minister and Prime Minister make these decisions,” he said.

In regards to the state’s cooperation with the tourism sector, President of the Hellenic Federation of Hoteliers Andreas Andreadis sees things differently.

“The government’s cooperation with tourism agencies through discussions and statements of good intentions, all without any follow-up or action, in reality is meaningless,” he said.

In contrast, the Hellenic Association of Travel and Tourist Agencies (HATTA) said it believed that the strength of the Greek tourism product, coupled with combined efforts of the state and the productive classes, would bring results for next year.

He added that the overall losses expected for 2010 were “small” compared to the general decline feared due to the global crisis and everyday problems that affected Greece’s image abroad.

Mr. Telonis said that what actually should trouble the tourism sector is the substantial drop in revenue over the last two years.

“The current tourism political leadership, just as the previous one, managed to do something extremely crucial and that was to devalue the outcome of the country’s tourism product in two years by some 15 percent,” Mr. Andreadis from the Hellenic Federation of Hoteliers said.

He underlined that as a result, the tourism contribution to Greece’s GDP will shrink to less than 15 percent by the end of 2010 against 18 percent of the country’s GDP in 2008.

“It seems that those responsible for the country’s finances have not taken seriously the risk of Greek tourism collapsing as they do not listen or respect the tourism agencies and professionals,” GEPOET’s Marios Trivizas said.

HAPCO’s Dinos Astras added that tourism professionals have faced several major crises that have affected tourism over the last 20 years and have learned to struggle and hope for the best.

“We are now making the effort to overcome the many problems and reverse the current situation with the government on our side as a valuable ally,” he said.

However, one of the main complaints of the tourism sector remains the government’s decision to merge the tourism ministry with the culture ministry, giving the impression that tourism is not among the country’s priorities.

“The Greek PM must realize his wrong choice and re-establish an independent tourism ministry as soon possible,” Mr. Andreadis stressed.

“The government’s constant refusal to re-establish an independent tourism ministry is the starkest example of this indifference,” she said.