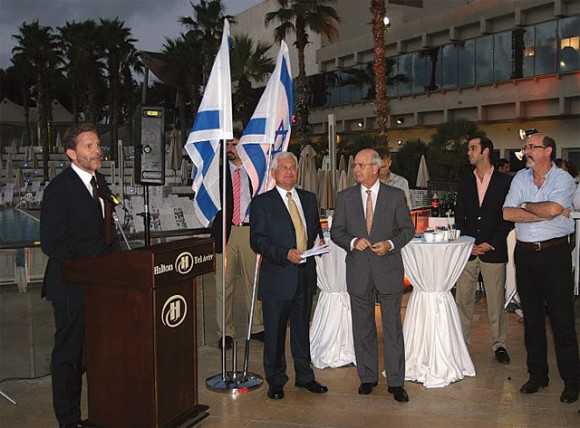 Culture and Tourism Minister Pavlos Geroulanos giving a speech at the Tel Aviv Hilton in Israel during an official visit. He said that he hopes Israelis would continue to visit Greece when the crisis with Turkey is over, even though prices in Greece are relatively higher as it is a member of the Eurozone.

According to tourism professionals, tourist traffic from Israel to Greece has increased to a great extent as Israelis are avoiding visits to Turkey due to the worsening relations between Tel Aviv and Ankara.

When asked if the bad relations of Turkey and Israel had affected the tourist flow to Greece, Mr. Geroulanos replied, “Greece could certainly propose more prosperous tourist products than Turkey could.”

According to Israel Airports Authority data, in July Greece saw a 75 percent increase in Israeli tourists, compared to July 2009, with 84,000 outgoing and incoming passengers between the two countries.

During the same period, a 72 percent drop in the number of Israeli travelers from Ben-Gurion International Airport to Antalya, Turkey, was recorded, compared to the same month last year.

“Greece appears to have benefited from the situation (bad relations between Turkey and Israel),” the Israeli press remarked.