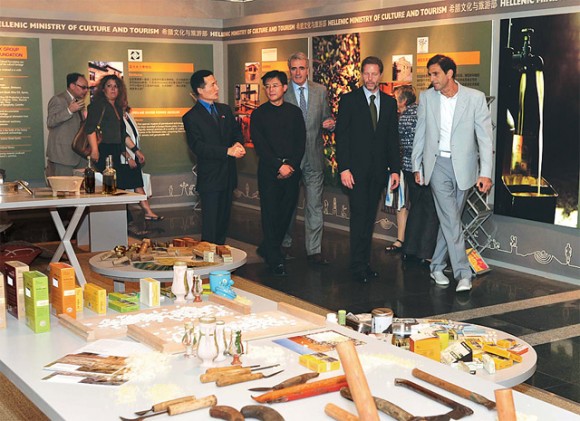 Culture and Tourism Minister Pavlos Geroulanos and General Secretary of Tourism Yiorgos Poussaios tour the Greek pavilion during the first day of Greek Tourism Week at the Shanghai World Expo 2010 in late August. “Greek Tourism Week” promoted Greece as a tourist destination for young couples and displayed live performances of the country’s history via 3D images.

“We aim to increase the number of Chinese visitors to Greece in the coming years and for this purpose actions have already been made to simplify the process for Chinese citizens to obtain a visa to travel to Greece,” Culture and Tourism Minister Pavlos Geroulanos said while inaugurating the Greek Tourism Week event in Shanghai, China, on 27 August.

Mr. Geroulanos added that Greece is preparing to offer facilities and services focused on the needs of the Chinese traveler.

Greek Tourism Week (27 August-3 September) was one of the main events of Greece’s participation in the Shanghai World Expo 2010, which began in May and wraps up on 31 October.

The opening ceremony of Greek Tourism Week was held at the Shanghai Library where an exhibition on Greece also opened titled “You in Greece.”

The exhibition was the main activity of Greek Tourism Week as it highlighted various aspects of the Greek tourism industry and cultural traditions and also suggested ways to promote them in the Chinese market. 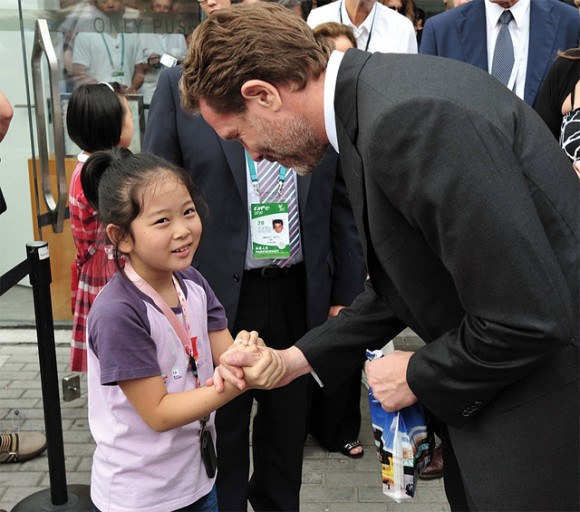 Culture and Tourism Minister Pavlos Geroulanos is seen here greeting a young visitor at the Greek pavilion during “Greek Tourism Week,” one of the main events of Greece’s participation in the Shanghai World Expo 2010. Mr. Geroulanos recently told the Greek press that out of 50 million Chinese tourists that travel the world each year, Greece welcomes only 25,000 of them. However, the minister underlined that if the visa issuing process for Chinese citizens is simplified then Greece could easily expect 250,000 Chinese tourists within two years.

During his opening speech, the culture and tourism minister referred to the prospects for strengthe­ning the Chinese interest in tourism in Greece.

“We are preparing proposals to major local tour operators and exploring a potential cooperation with international carriers to find solutions for the transport of the Chinese public to Greece,” Mr. Geroulanos said.

According to Xinhua news agency, already several Greek and Chinese airline companies have shown an interest to launch a direct Beijing-Athens flight connection.

The culture and tourism minister also highlighted that the ministry plans to promote thematic forms of tourism to the Chinese public such as modern Greek culture, wedding tourism, marine tourism (sailing, yachting, diving) and luxury tourism.