The Role of Women In Tourism 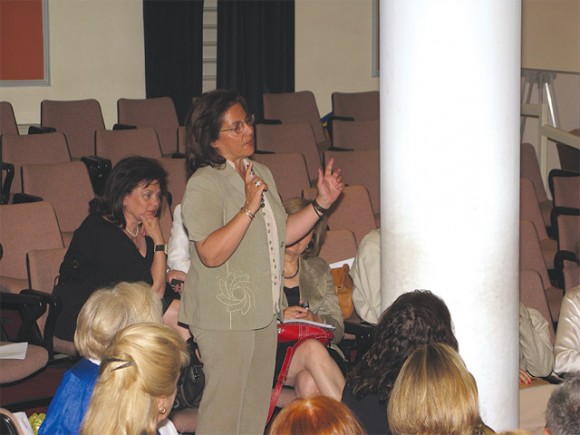 During the workshop, ATEDCo’s President Katerina Katsabe made particular reference to the strategic action plan of the City of Athens that aims to promote Athens as a city break and conference tourism destination. However, Marianna Tsigaridis, licensed tourist guide (photo), asked her what exactly was being done to solve the city’s problems. “It’s embarrassing for me to explain to tourists why Greece gives the impression of a third world country with garbage and stench in the street and near the monuments,” she stressed.

“Based on statistics presented by Eurostat, women make up 56 percent of those employed in the hotel and restaurant sector among the European Union member states… Greece ranks low with only 44 percent,” Athens Economic and Tourism Development Company (ATEDCo) President Katerina Katsabe said.

In an effort to show the contribution of women in the development of the tourism industry, ATEDCo, in collaboration with the Women in Tourism Association, recently held a workshop entitled “Tourism and Woman-Hospitality is a Female Privilege” at the City of Athens Cultural Center.

During the workshop, speakers analyzed the importance of female entrepreneurship in the tourism industry for the promotion of the economic development of Athens.

“The women’s role in tourism is particularly important in the service sector,” Ms. Katsabe said.

“The state has an obligation to support efforts to enhance women’s entrepreneurship,” she added.

According to figures of the World Travel and Tourism Council, some 900,000 people are directly and indirectly employed in the Greek tourism industry and more than 50 percent of this force are women,” according to the President of the Hellenic Chamber of Hotels Yiorgos Tsakiris.

“Tourism is the only sector of the Greek economy that a woman’s presence exceeds that of 50 percent,” he said.

“Turn To The Argosaronic” In Athens Center