Overnights And Revenue Down At Athens-Attica Hotels 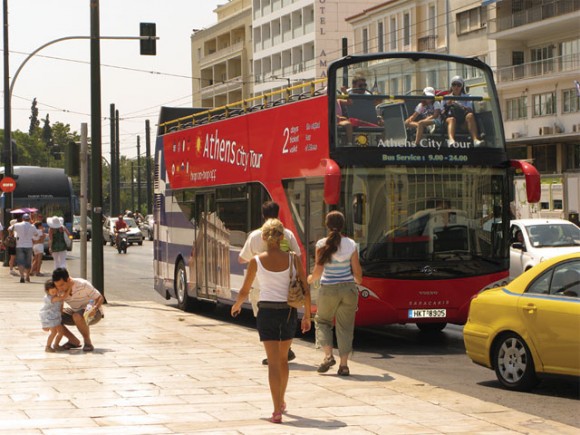 Tourists enter a Hop On Hop Off bus for a city tour of Athens last month. Besides a heat wave, August did not present problems that would affect the stay of foreign visitors in Athens. However, this was not the case during the previous months. The latest GBR Consulting report listed obstacles that stand in the way of tourists visiting the Greek capital, such as the “ghettoization” of the historic center and the non-access to archaeological sites, roads, ports and hotels due to continuous blockade operations of Greek unionists.

Athens suffered the biggest losses during the first seven months of the year in regards to the number of tourists visiting Greece, the latest figures released by the Association of Greek Tourism Enterprises (SETE) showed.

According to the figures, 1.72 million travelers visited the capital during the January-July 2010 period, down 5.18 percent from 1.82 million visitors in 2009.

As well, when speaking to the Greek press, Athens-Attica Hoteliers Association President Yiannis Retsos said that sector revenue is expected to be eight to 10 percent lower than last year.

However, Mr. Retsos said that he was optimistic and that Greek tourism is “hanging on” despite uncertainties such as workers’ protests and rallies.

Moreover, passenger traffic at Athens International Airport in the first half of the year remained at the corresponding 2009 levels as it recorded a 0.1 percent increase and totalled with 7.2 million passengers, despite a 3.5 percent drop in flights mainly attributed to the negative second quarter of the year.

In regards to hotel performance in Attica during the first half of the year, revenues dropped by 3.6 percent with revenue per available room declining to 62.68 euros.

According to the latest report of GBR Consulting, during January-June 2010 the average occupancy was 57.4 percent, down 1.2 percent compared with the corresponding 2009 period and the average room price was 109.14 euros, down 2.4 percent.

According to the report, when comparing the performance of Attica hotels with that of 10 major European destinations for the first five months of 2010 only the hotels in Athens show negative revenue per available room. “All other destinations show positive signs of recovery from a bad 2009,” the association said in a press release.