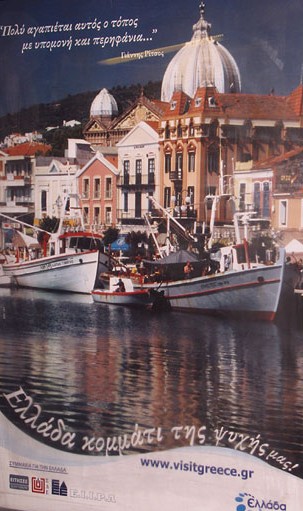 A poster from the “Greece, a part of our soul” campaign. The ads of the campaign feature various Greek locations and include verses written by world-renowned poets Elitis, Ritsos and Mavilis.

A private initiative aimed to attract domestic tourism back to Greece that will impose absolutely no cost to the Greek government or taxpayer was launched in late July by the Alliance for Greece group.

The group, which includes professionals from Greek communication sector organizations such as advertising, television, radio and publishing companies, aims to promote “a dynamic and social message that would speak to the soul of the Greeks.”

The aim of the campaign entitled “Greece, a part of our soul” is to reverse the pessimism and negative criticism Greeks express for their country and “convince” them to holiday at home.

The “Greece, a part of our soul” campaign will run until 31 December with zero cost for the Greek National Tourism Organization and include television and radio commercials, advertisements in print media and public spaces (such as metro stations).

Kalymnos… An Ideal Destination For All