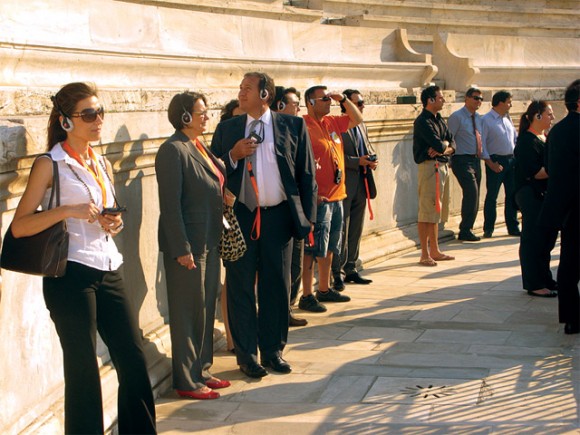 Hellenic Olympic Committee Spyros Kapralos (third from left) accompanied tourism professionals during an organized tour of the Panathenaic stadium. “It was a shame that the stadium was closed off to the public… Many times I saw visitors hanging over the gates to get a glimpse of the site,” he said.

“Our goal is to bring in as many guests as we can so we can contribute to Greece’s tourism,” the president of the Hellenic Olympic Committee, Spyros Kapralos, told tourism professionals last month.

During a briefing in regards to the recent opening of Athens’ Panathenaic Stadium (Kallimarmaro) to the public, Mr. Kapralos referred to his intention to cooperate with tour operators and travel agents in regards to the stadium’s promotion.

He announced a 10 percent discount for organized groups of visitors of more than 20 people and clari­fied that visitors are free to tour all premises of the stadium. In addition, the stadiums atrium (former athletes locker room) could be booked for events. 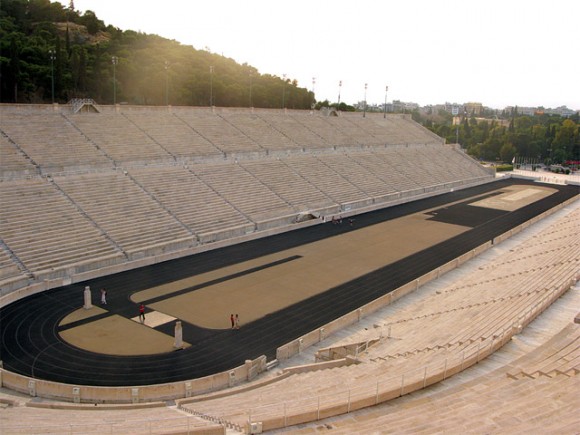 When questioned by GTP if the stadium’s entrance fee (three euros) would be included within the 12-euro joint ticket that offers entrance to all major monuments of Athens, Mr. Kapralos said that for now the stadium would cut a separate ticket.

“There is too much bureaucracy involved so we preferred to open the stadium’s gates first and gradu­ally deal with the red tape,” he told GTP.