Milos: Not Only Sun & Sea 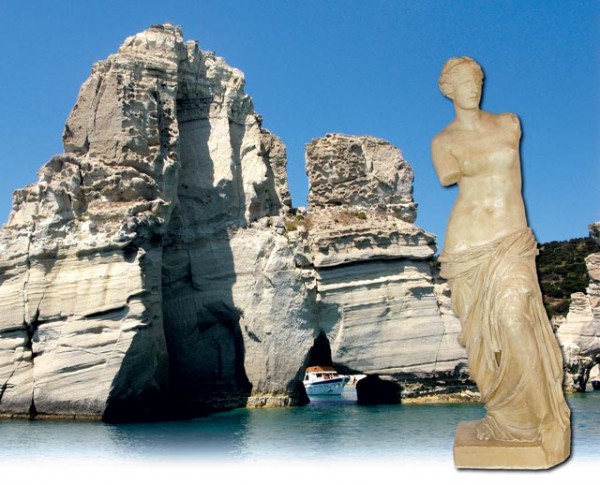 Financial crisis, International Monetary Fund, tourism, holidays, Milos… Greece’s economic crisis made headlines throughout the international media and German magazine Focus decided to “be creative” and circulated front cover issues that depicted the famous Venus de Milo statue first making an indecent gesture and then begging for financial aid. However, on Milos, Venus (Aphrodite) is not gesturing or begging. She remains a symbol of beauty and invites the world to travel with her to an impressive landscape.

While other islands try to shed the reputation of a “sun and sea destination” and promote other forms of tourism, on Milos we promote our “sun and sea” since this is what our visitors look for so there is no reason to hide it, Milos Deputy Mayor Averkios Gaitanis told GTP.

The Milos Municipality recently organized a familiarization tour of the island and gave journalists the inside story on the island’s geological, morphological, historical and cultural elements. 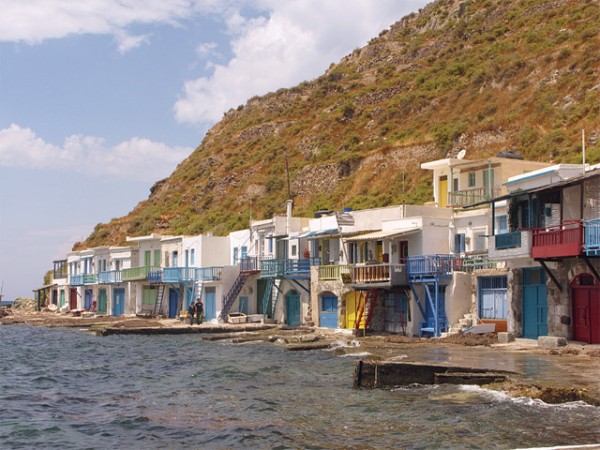 The brightly colored fishing village Klima, where the boathouses extend all the way to the small coast, is definitely worth a visit. The boathouses are known as “sirmata,” in reference to the wires boatmen use to haul their boats ashore.

“Milos has natural beauty (sun and sea) and this is what we ‘sell’ and show exactly what we can offer visitors,” the deputy mayor said.

Milos, found in the southwest of the Cyclades, is famed for its beaches, which can be considered sights on their own as they vary in regards to the colors of the rock landscape and sea.

However, the deputy mayor clarified that besides having the reputation of “the island with 75 beaches” Milos can also offer visitors other forms of tourism as well.

“These forms of tourism are not organized yet to the extent for the island to be considered a representative destination but quality is guaranteed,” he said. 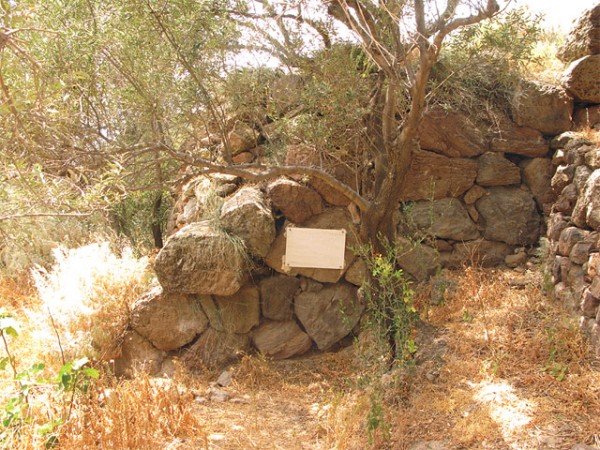 The location where the Venus de Milo, marble statue of goddess Aphrodite, was found in the beginning of the 19th century. “We are glad the original statue is at the Louvre in Paris as it gives the island publicity that way,” according to Stella Primikiri, tourism marketing, Milos Municipality.

The journalists’ tour began at the Catacombs of Milos, which are considered the second most important Paleo-Christian monument in the world, after those of Rome.

Milos last year was recognized as a “Holy Island” and introduced as a destination ideal for religious tourism. This opened up new prospects for the island with benefits for tourism and Greece’s promotion abroad.

From the catacombs, and after walking through a rocky setting, the next stop was the Ancient Theater of Milos.

The theater—that can accommodate up to 7,000 spectators—is soon to undergo a much needed restoration project by the Culture Ministry. The project’s budget is some 1.5 million euros and should be completed by 2013. 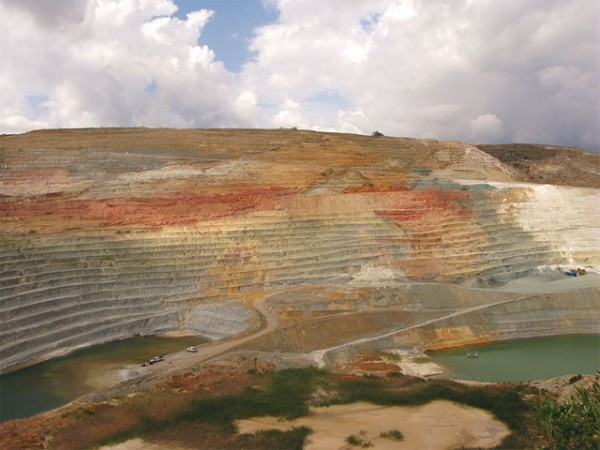 The mining history of Milos began 10.000 years ago and continues until today. The bentonite mine located in Aggeri (pictured) is one of the most impressive and biggest mines in Europe, known for its fabulous colorings. Operations in Aggeria began in 1985 and the average annual bentonite extraction is one million tonnes.

Milos is also of geological interest as it has a mining history that dates back 10,000 years. Today it is the largest bentonite and perlite production and processing center in the European Union.

The mining history of the island is promoted through the Milos Mining Museum, located in Adamas, the harbor of the island. Its establishment also aims to display the island’s mineral wealth.

Journalists were informed that the museum itself could make Milos a destination for educational tourism as it has welcomed groups of geology students from international universities.

“There are quite a few ancient walking paths that combine the island’s history with a walk through nature,” Yiorgos Mallis, chairman of the Friends of Mountain and Sea Federation, told GTP.

The federation, in cooperation with the Milos Municipality, aims to contribute to the growth of walking tourism and ecotourism in general on the island. The federation’s priority is to clean up, improve and map the island’s paths.

As for conference tourism, the Milos Conference Center “George Eliopoulos” has come to contribute substantially to this field as it has opened up prospects for a new type of high quality tourism: academic tourism.

But all this is just on one side of the island. On the west side of Milos a totally different story awaits visitors.

“The west side is the least known part of the island since everyone is familiar with the 75 beaches of Milos but actually no one knows why the beaches are formed the way they are,” said Anastasia Vasilopoulou, from the Milos Mining Museum, in reference to the geological characteristics of Milos. 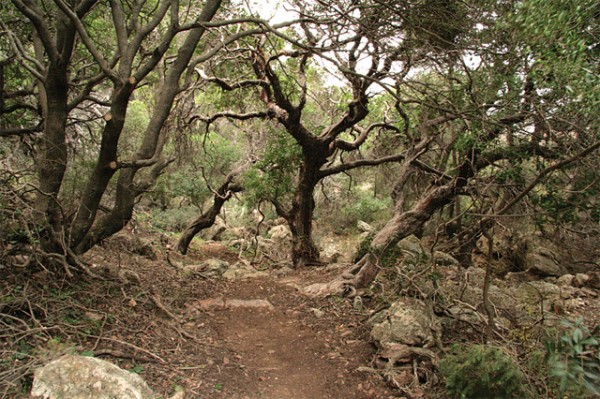 Local travel agencies organize excursions to the natural park “Arkefthos,” located on the western side of the island. When walking down the park’s path visitors will see cypress trees and cedars, learn about the viper of Milos and enjoy alternative activities under development. “Arkefthos” is a private initiative of local resident Yiannis Kostoulas.

As of 1996 the biggest part of the west side was added to the regions of Greece that are included in the European Program “Natura 2000” for the protection of the wild flora and fauna.

In line with the Natura 2000 program, a large area of western Milos, Chalakas, has been laid out for the protection of the viper of Milos (Macrovipera scheizeri), in an attempt to save it from extinction.

“Western Milos is for ‘specialized’ tourists who seek wild beauty, geological formations, caves and want to see wild goats running around,” according to Petros Papageorgiou, chairman of the island’s sustainable development organization ORAMA.

As for future plans, Deputy Mayor Gaitanos told GTP that he aspires for Milos to gradually become an organized tourism destination. 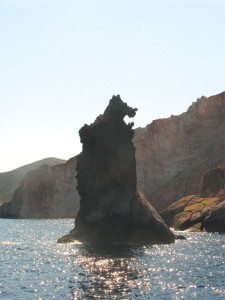 When sailing around Milos visitors will see many unusual rock formations that protrude from the sea and stand near Adamas harbor. Pictured is a rock that is referred to as “Arkouda” as it resembles a bear.

“For the past four years the Municipality of Milos is the only municipality with a full marketing plan, which has been under implementation over the last three years,” he said.

Visitors to Milos by majority are Greeks and Italians but Mr. Gaitanos spoke of plans to gradually approach other markets.

“Future plans include bringing in the markets of the United Kingdom, Spain and France,” he said.

“We will approach each market differently… For example, we will promote the site where the Venus de Milo was originally discovered to the French market,” Mr. Gaitanos said.

“They enjoy the authentic statue at the Louvre Museum in France but do they know where it came from?” he asked smiling.

Bookings On Milos Drop In May
In regards to this year’s tourism season, president of the Milos Hoteliers Association, Nikolaos Moraitis, appeared optimistic “because Milos is a top summer destination for Greek and foreign visitors.”

However, bookings during the three-day holiday of the Holy Spirit (Agiou Pnevmatos) on 22-24 May saw a drop. 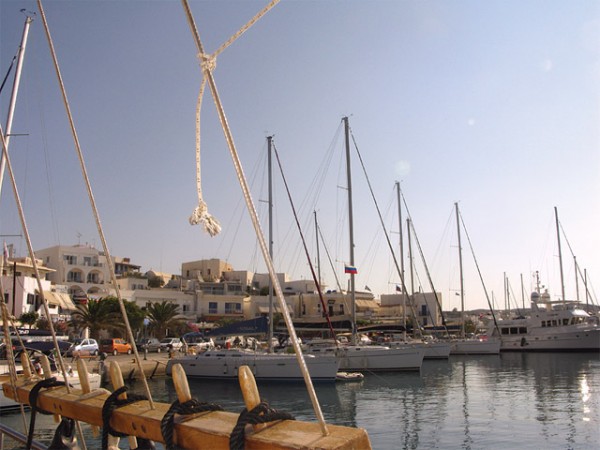 The marina of Adamas on Milos. Here sailing enthusiasts can hire yachts for daily cruises around the island’s many beaches and also to nearby Kimolos island.

“Milos was always a weekend destination for Greeks during this holiday but we did see a reduction in reservations… This could be due to the economic crisis but also because of the bad weather this year,” Mr. Moraitis said.

In regards to accommodation prices, Mr. Moraitis underlined that room prices on the island have remained almost the same for the past four years. “For 2010 prices will remain at last year’s levels,” he said.

As for summer bookings, the hoteliers association’s president said that if transport links are on schedule then there would be no problem with foreign visitors since early bookings have already begun. “Greeks however do not book early as they usually organize their holiday after 15 June,” he said.