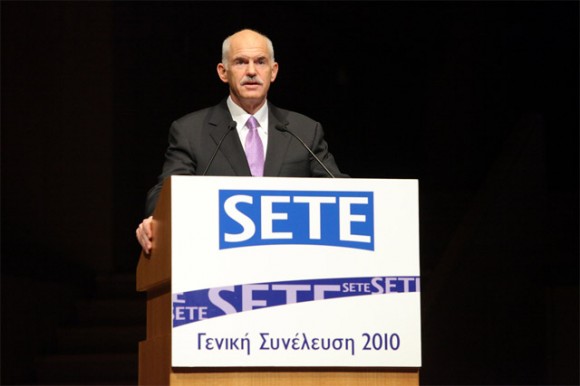 Prime Minister Yiorgos Papandreou addressing SETE’s 18th general assembly. Mr. Papandreou received a loud applause from the audience once he announced the government’s intention to lift cabotage restrictions. The prime minister also informed on two new projects that total 100 million euros to be launched for the renovation of small tourism businesses with small loans, as well as larger tourism businesses with loans of a larger budget.

The lifting of cabotage restrictions should take place immediately following a dialogue with all agencies involved until the end of May, Prime Minister Yiorgos Papandreou announced during the recent 18th general assembly of the Association of Greek Tourism Enterprises (SETE).

The lifting of cabotage (which would allow embarkation /disembarkation of foreign-flag cruise ship passengers at Greek ports) has been a demand of the vast majority of the Greek tourism sector for years.

Mr. Papandreou stressed that for years “we depreciated our strategic advantage, which is our strategic position in the Eastern Mediterranean and the hundreds of Greek islands.

“We even depreciated our maritime tradition and its worldwide power,” he said. 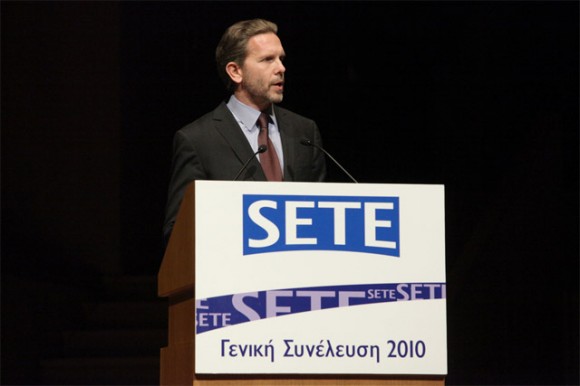 According to the prime minister, among the benefits from the abolition of cabotage would be the lengthening of the tourism season with the development of winter cruise.

Mr. Papandreou explained that this would give a significant increase in revenue for the hotel industry in Athens, Thessaloniki and Crete.

“Besides the new work positions that would open on land and sea -in Italy some 4,000 Italian sailors were employed in the cruise industry following the lifting of cabotage restrictions- jobs will be created in many other areas,” he said.

The lifting of cabotage was just one of the mea­sures of the action plan for Greek tourism the prime minister announced at SETE’s general assembly.

Mr. Papandreou said that the government is planning to upgrade the training and preparation for seamen of hotel positions and promote Greek seamen to responsible positions in cruise companies through government agencies.

In regards to aviation the prime minister announced the exemption from the payment of aircraft landing fees and stay dues at all Greek state-run airports (all but Athens International Airport) for this year’s summer season and a 50 percent exemption in the winter months.

The measure is to attract low-cost airline companies and tour operators for Greek tourism’s development.

In addition, Mr. Papandreou also referred to the total liberali­zation of ground handling services in Greek airports and drastic reduct­ions to the cost of acquiring a tourist visa for visitors from new, dynamic and emerging markets such as Russia, Ukraine and Belarus. 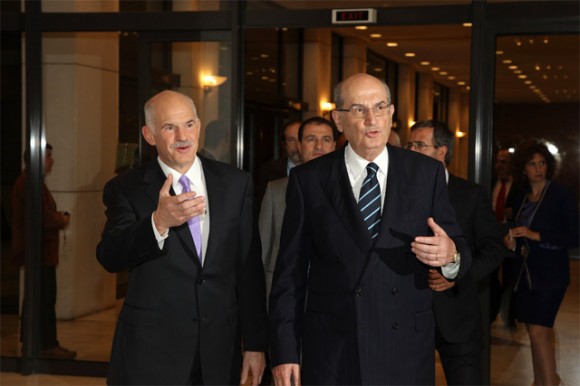 Prime Minister Yiorgos Papandreou upon his arrival to the 18th general assembly of the Association of Greek Tourism Enterprises (SETE) at the Athens Concert Hall (Megaron Mousikis) accompanied by SETE’s President Nikos Angelopoulos. Although the PM’s speech referred to solutions for key issues of the tourism sector, once again SETE’s president requested for a change in the Greek National Tourism Organization’s operation. “The successful models of France’s Maison de la France and the U.K.’s Visit Britain show the examples we should follow,” he highlighted.

On his part, prior to the speech of the prime minister, SETE’s President Nikos Angelo­pou­los requested a “powerful Tourism Ministry with enhanced powers.”

Once again Mr. Angelopoulos underlined that coordination among ministries jointly involved in tourism can not be effective unless conducted by the prime minister’s office.

“The inclusion of tourism in a ministry with culture, sport and part of the media has harmed both culture and tourism,” Mr. Angelopoulos said.

SETE’s president stressed that the government still does not understand tourism’s importance, as no tourism association was included for the drafting of the new zoning law for tourism.

According to the prime minister, the new zoning law for tourism should be completed by June.

Mr. Angelopoulos said that once again the tourism associations would merely be informed on decisions already made by a committee from which tourism professionals have been excluded.

“This will result to delays, corrections and friction against the demanded growth,” he said.