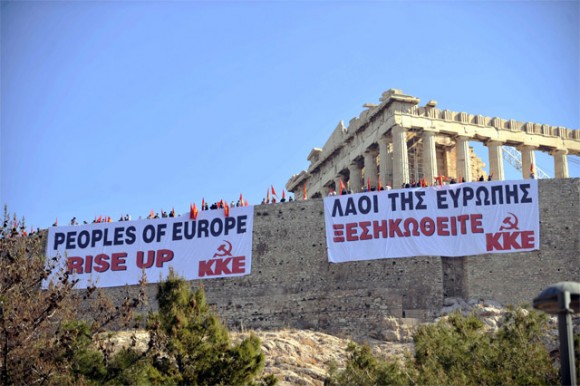 On 4 May tourists were in for a surprise once they approached the Acropolis and saw huge banners hung over the walls with the slogan “Peoples of Europe, rise up” in Greek and English. Some 200 members of labor union PAME had violated the gate at the Acropolis during the morning hours and staged a takeover in protest of the government’s austerity measures.
Photo: Α.Νikolopoulos/EUROKINISSI

While a hard battle is fought throughout the world to recover Greek tourism, this move is at the least irresponsible, the Culture and Tourism Ministry recently said in regards to the takeover of the Acropolis by the Communist Party of Greece (KKE)-affiliated labor union PAME.

“Aside from putting the monuments and guards at risk, this move is illegal and exposes Greece all over the globe,” the ministry said.

According to reports, Government Spokesman Yiorgos Petalotis condemned the takeover and accused PAME of undermining tourism, under the responsibility of KKE party, by opposing the embarkation of tourists at the port of Piraeus and by violating the Acropolis.

On their part, KKE said that PAME members did not block tourists from entering the Acropolis but security guards did as a strike by the civil servants’ union ADEDY was already in progress.