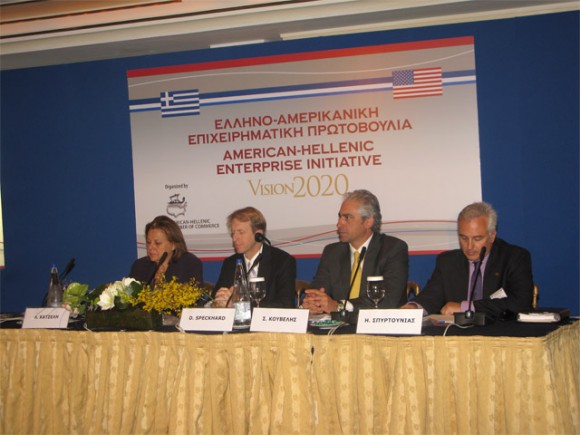 The mission of the American-Hellenic Enterprise Initiative (AHEI), Vision 2020, is to develop and implement Greece-U.S. actions that further bi-national trade, investment, green energy solutions and tourism in connection with culture and entrepreneurship through the combined efforts of AHEI Partners, American-Hellenic Chamber of Commerce President Yanos Gramatidis said recently.

The AHEI, Vision 2020, is a major new initiative designed to stimulate and propel Greece-U.S. commercial and investment relations. The initiative, launched on 15 April, followed the meeting between Greek Prime Minister Yiorgos Papandreou and U.S. President Barack Obama in March.

“AHEI focuses on the challenges of the 21st Century and is an initiative to respond to those challenges with solutions derived from Greece-USA synergies,” Mr. Gramatidis said.

The Hellenic-American Chamber of Commerce has signed a Memorandum of Cooperation with more than 40 private and public entities, including the Association of Greek Tourism Enterprises (SETE) and the Greek National Tourism Organization (GNTO).

GNTO Offers Tourism For All