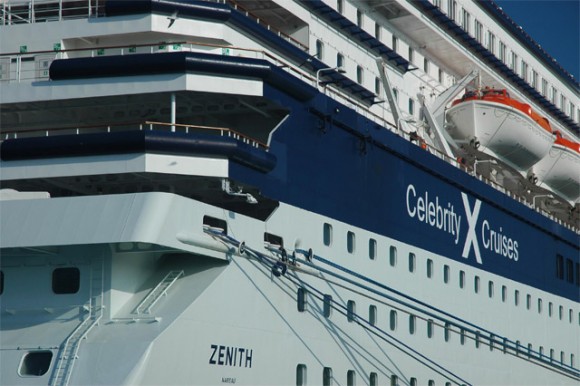 On 26 April, protestors prevented some 970 Spanish tourists from boarding the Maltese-flag cruise ship, Zenith. The tourists were to board the ship for a 7-day cruise but instead departed the next morning (after a 12 hour delay).

Lifting cabotage restrictions would mean the end of Greek-flagged cruise shipping and the funeral of Greek sailors, Antonis Dalakogiorgos, head of the Panhellenic Seamen’s Federation (PNO), recently told the media.

“The liberalization of cabotage in the cruise shipping industry would mean massive job losses in all specialties, particularly in regards to Greek crews and port personnel who play an important role for the ships and passengers safety,” according to PNO.

Meanwhile, on 26 April a severe blow to Greece’s image came when some 400 Greek seamen and leftist protesters blocked the entrance to Piraeus Port and prevented some 970 Spanish tourists from boarding the Maltese-flag cruise ship, Zenith.

PNO had demanded for 107 Greek seamen to be hired on the Zenith cruiser. The cruiser’s owner, Royal Caribbean International (RCI), has said that it is not obliged to comply as it already employs a total of 1,100 Greek workers.

As a result of the incident, the Zenith -operated by Pullmantur shipping company, a subsidiary of Royal Caribbean- warned that it may “knock” Piraeus from its cruise map.

The Zenith has scheduled 33 weekly cruises for this season to homeport from Piraeus and is to carry a total of 100,000 Spanish passengers to Greece.

“The withdrawal of the Zenith cruise ship from Piraeus would result to the loss of 10 million euros in revenue and 400 unemployed workers,” according to the Association of Greek Tourism Enterprises (SETE).

“Images such as those that took place at Piraeus Port by the sailors are clearly the worst advertisement for our country at a very critical period for tourism,” Andreas Stylianopoulos, President and CEO of Navigator Travel, general sales agent in Greece for Royal Caribbean International, told GTP.

Mr. Stylianopoulos said that such incidents are unacceptable and prevent any interest of investment for the sector’s development in Greece.

According to RCI, Pullmantur representatives are expected to come to Greece soon and hold meetings with the relevant ministers to discuss the issue and decide if the Zenith would continue to homeport in Piraeus.

PNO insists that no shipping exchange would flow from the liberalization of cabotage.

“This is a myth as foreign-flag cruise ship passengers travel via organized excursion packages from abroad and the possibility of strengthening the Greek economy by purchasing goods and services does not exist,” the federation said.

The federation strongly believes that any liberalization of cabotage would bring a serious blow to competition rules of Greek-flag ships and the loss of hundreds of jobs of Greek seafarers.

The complete lifting of cabotage on the cruise industry has been an established position of tour operators and travel agencies for years.

According to figures from the Hellenic Chamber of Shipping, Greece’s benefit from the lifting of cabotage would be some 1.16 billion euros a year (an amount that corresponds to 15,000 new jobs.)

In addition, the study of Contribution of Cruise Tourism to the Economies of Europe noted that in 2008 some 3.14 million passengers visited the Mediterranean. The most important countries of embarkation are Italy and Spain.

Lifting Of Cabotage Discussed Once Again