Athens Hoteliers Up Against Mass Cancelations 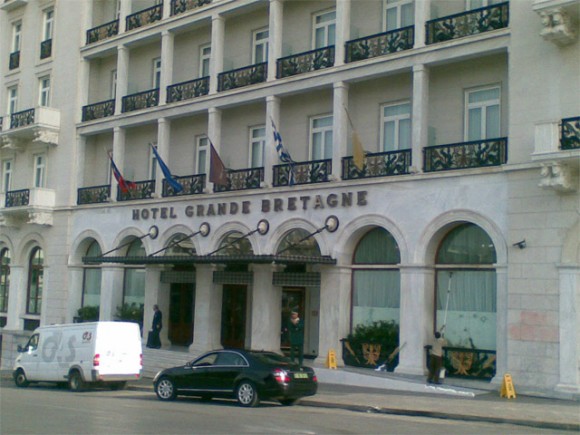 The day after the 5 May protest was “clean-up day” for the luxury Grande Bretagne Hotel on Syntagma Square as the day before its windows were smashed once the riots outside of Parliament began to heat up. Tim Ananiadis, the hotel’s general manager, told the press that the Greek government should become concerned and immediately transform Athens into a “safe city.”

Almost two weeks after the violent anti-austerity protests in Athens center on 5 May, during which three people died in a fire set by self-styled anarchists, some 28,000 hotel room reservations were canceled in the Greek capital and the trend is steadily rising, Athens-Attica Hoteliers Association General Secretary Alexandros Vasilikos told journalists last month. The data is from 68 central hotels (out of some 450 hotels in Attica).

The mass cancellations that involve individual reservations, group bookings, conferences and events have caused Athens hoteliers distress, as the May-June period is usually the busiest tourism period for the Greek capital.

Yiannis Retsos, the association’s president, requested from the government to pay the Greek National Tourism Organization’s past debts to international media so as to curb the negative publicity from abroad.

“At the moment we should not be worried about how these debts were created but how to overcome this particular situation and prove to everyone that Athens and the wider area of the capital is a safe city,” Mr. Retsos told the Greek press.

According to reports, 21 conferences and events organized to take place at city hotels were all canceled almost right after the protests.

Mr. Retsos stressed if the situation continues many hoteliers in the city center would be forced to shut, something that would have devastating effects on Greece’s economy and employment.

Meanwhile, travel advisories from key tourism markets to Greece were released immediately after the broadcasting of events. 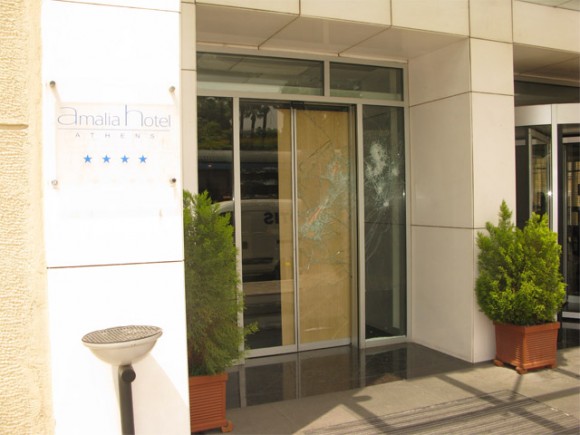 Amalia Hotel on Amalias Avenue, Syntagma Square, was not ignored during the 5 May anti-austerity protest as self-styled anarchists smashed the windows of its front entrance. Security cameras have now been installed at the front entrance.

The ministries of foreign affairs of Bulgaria, the United Kingdom, France, Australia, Ireland, Romania, FYROM, and the Czech Republic issued travel warnings after the violent riots took place in the Greek capital.

Some advised caution and mentioned Omonia and Syntagma as areas of “particular risk for crime” while others suggested avoiding the country completely (Bulgaria and FYROM for example).

In an effort to reassure that Athens and all of Greece is a safe travel destination, the Association of Greek Tourism Enterprises (SETE), in cooperation with the Culture and Tourism Ministry, sent an English-language announcement to foreign tourism representatives, travel agencies and companies.

The announcement assured that all strikes and protests that took place in Athens during the first week of May 2010 were limited to a small and restricted area in the city center.

“No such demonstration occurred at any of the traditional tourist destinations throughout Greece,” the announcement clarified.