Greece will grant multiple-entry visas for six to 12 months and up to five years to Russian citizens, Culture and Tourism Minister Pavlos Geroulanos announced to the Russian press during his visit to the 17th Moscow International Travel and Tourism (MITT) exhibition that ran 17-20 March. 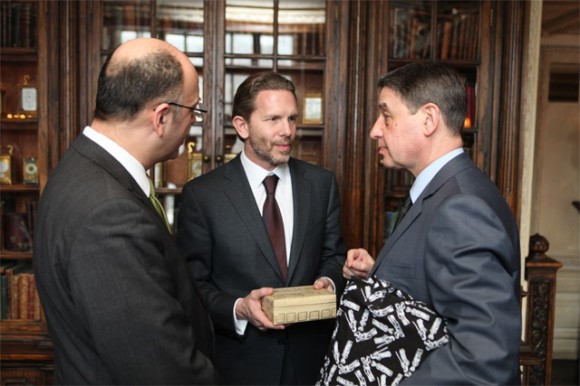 During his visit to this year’s MITT exhibition in Moscow Culture and Tourism Minister Pavlos Geroulanos met with Russia’s Minister of Culture Alexander Avdeev (right).

According to the culture and tourism minister, multiple entry visas with a duration of six to 12 months would be issued to Russian citizens who visit Greece frequently or those who wish to visit Greece again in the same year, after their first trip.

“Visas of up to a five-year duration will be issued to visitors known to Greek authorities who visit Greece mainly for business purposes,” he said.

In regards to the cost of the visas, the tourism minister underlined that, as a Schengen member, Greece is required to abide with specific rules and therefore cannot abolish the visa fees.

However, he informed of plans to reduce the cost of the visa paid to the visa centers in Russia (currently 15-20 euros). The tourism minister said that approval was pending by the Economy Ministry.

During the inauguration of the Greek National Tourism Organization’s stand at the 17th MITT exhibition, Deputy Culture and Tourism Minister Angela Gerekou said that the ministry aims to establish Greece as an all-year-round destination and not only a summer month destination.

“And with this thought we are continuously creating new ‘reasons’ for one to visit our country,” the deputy minister said in her address.

At a press conference, Mrs. Gerekou informed Greek and Russian media that the GNTO would create a portal that would gradually be enriched with information on “every corner and each tourism product of Greece.” 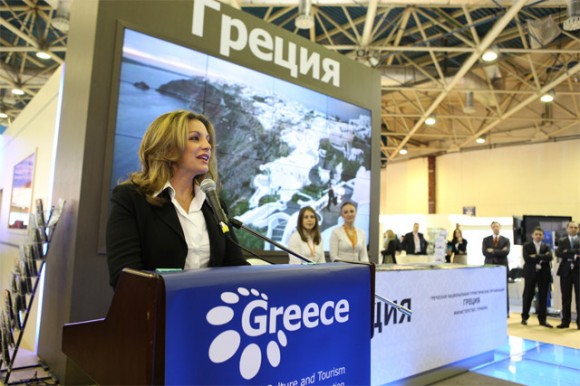 Deputy Culture and Tourism Minister Angela Gerekou during the inauguration of the Greek National Tourism Organization’s stand at the 17th MITT exhibition.

She specifically highlighted marine tourism as one of the ministry’s top priorities. “Already 20 marinas are ready for operation… A key priority is to offer the best service to someone who wants to come to our country by boat and explore our islands, our seas.”

In regards to 2010 hotel prices and whether they would be affected by the value added tax increase announced by the Government, Mrs. Gerekou stressed prices would be low “as reasonably achievable.”

The deputy minister also mentioned of the ministry’s talks with the Transport Ministry in regards to the number of flights from Russia to Greece and back. As for charter flights, Russian tour operators confirmed that there is an increase in flights to many parts of Greece such as Thessaloniki, Crete and Athens.

According to Russian travel agents, initial bookings to Greece show an upward trend of up to 30 percent on average, a fact considered encouraging to curb last year’s decrease in tourists from Russia.

Greece was the theme country at this year’s MITT and was honored the distinction for the “Best Presentation of a Destination for 2010.”