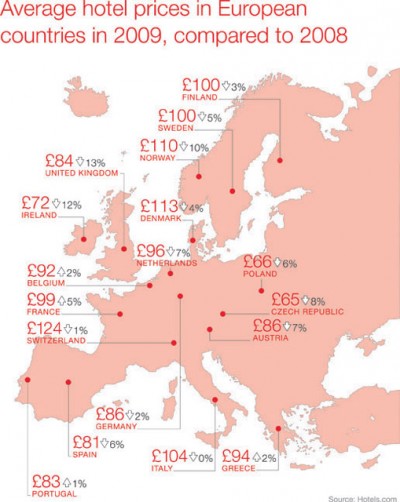 Average hotel prices in European countries in 2009, compared with 2008.

Greek hotels produced a two percent increase in the average price per room in 2009, according to the Hotel Price Index (HPI) survey released recently by U.K. website Hotels.com.

According to the HPI survey, just four European countries became more expensive for U.K. travelers in 2009 compared to the same period in 2008.

Average hotel prices in France, Greece, Belgium and Portugal all rose for U.K. travelers largely due to the weakness of the sterling against the euro.

Switzerland became the most expensive country in Europe for U.K. visitors in 2009, while last year prices in the U.K. fell the most of any European country.

The HPI is a regular survey of hotel prices in major destinations across the world and is based on bookings made on Hotels.com.

Prices shown are those actually paid by customers (rather than advertised rates) in 2009.