The total outcome in regards to hotel bookings during this year’s Easter holiday did not satisfy Greek hoteliers but hasty conclusions should not be made in regards to the season’s final result, President of the Hellenic Federation of Hoteliers Andreas Andreadis advised last month.

Whether the blame falls on the international or domestic economic crisis, on Easter coming early or on hotel prices that were deemed too high the fact remains that hotels on Greece’s most popular Easter destinations did not attract Greeks this year.

“Less than half of the hotels in the country opened this year for the Easter period and those that did either made discounts or kept last year’s prices,” Mr. Andreadis told GTP. 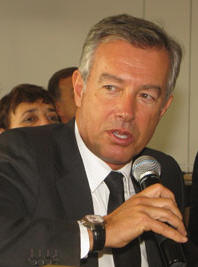 “Easter’s reduced bookings will be taken under consideration but we shouldn’t jump to conclusions about the outcome of this year’s summer season,” President of the Hellenic Federation of Hoteliers Andreas Andreadis told GTP.

Greek hotels were reluctant to open just for a few days and then risk remaining empty for one month until May, which is the start of the tourism season.

On this issue, the federation’s president said that changes were noticed in the travel habits of the Greeks that came as a result of the government’s recent economic measures.

“Visitors either cut the days of their stay (three days instead of five) or drastically reduced their out-of-hotel spending habits,” Mr. Andreadis said.

“In any case there is no doubt that the tourism demand has been affected due to circumstances shaped by the uncertainty caused by Greece’s economic situation,” he stressed.

Greek tourists mainly opted for hotels on the mainland this Easter as the 20-25 percent of coastal units that did open saw a drop in bookings when compared with previous Easter seasons.

The decline in tourism revenues this year will reach a high single digit percentage (seven or nine percent) even if arrivals remain at last year’s levels.

According to press articles, the Ionian Islands had a “rough” Easter as Zakynthos saw bookings drop 50 percent compared with 2009 while Kerkyra saw an estimated drop of 35 percent.

Kefallonia saw a reduction of some 20 percent in hotel bookings but also in tourism traffic in general. Local authorities told the Greek press that those who visited Kefallonia this Easter mainly owned summerhouses or were guests of locals.

In regards to the Cyclades island group, press reports mentioned that the reduction in visitors reached 15-25 percent compared with 2009.

On Mykonos, many hotels remained closed but those that operated near the island’s center saw an occupancy that reached some 95 percent, the island’s mayor, Athanasios Megas Kousathanas, told the press.

In regards to Santorini, the number of visitors to the island was indeed limited, but according to the president of the Santorini Hoteliers Association, Evaggelos Fytros, nothing different was expected, as most hotels remained closed on Easter.

“Charter flights to Santorini will begin as of May and there would be no reason to open hotels so early from the moment visitors could not reach the island in a timely matter,” he told GTP. (Sea connections are also not frequent to the Greek islands until the beginning of the tourism season.)

As for summer reservations on Santorini, Mr. Fytros said he believed things would not be worse than 2009.

“I think as a country, Greece will see a slight improvement in tourism this year but if we look at each destination individually tourism will have its ups and downs,” he added.

Mr. Fytros added that hoteliers dropped their prices for the 2010 season but stressed that among problems are last year’s debts from tour operators to hoteliers. He also underlined the poor state of the island’s airport and wondered why Greek tourism as a sector remains “unprotected.”

As for hotel bookings on Tinos, the president of the island’s hoteliers association, Petros Charalambopoulos, chose not to address the issue. “The issue of bookings has been tired out… What do you want to hear? Optimistic things? I have no comment,” he told GTP.

In regards to Dodekanissos, Rodos recorded a 30 percent drop in visitors this Easter when compared with 2009. Hotels on the island that usually open for Easter remained shut as hotel owners considered it too early to open.

Domestic tourism to the island of Patmos (northernmost island of the Dodekanissos complex) dropped some 70 percent compared with last year. Patmos is considered a top Easter destination.

Many hotels on Crete also remained closed during Easter.

Hotel reservations on Chania were reduced by 10-15 percent over last year -as the majority of visitors stayed with friends- while bookings in Rethymno fell some 30 percent.

On the other hand, in Epirus, occupancy in the hotels in Ioannina reached 100 percent compared with last year, as was the case for the region of Preveza.

Polikarpos Halkidis, president of the Preveza Hoteliers Association, said that hotel and other lodge bookings were on the same level as last year. “This Easter we had 100 percent occupancy just as we expected,” he told GTP.

Mr. Halkidis underlined the fact that Preveza is a destination with many options, it is accessible by the Egnatia highway and inexpensive.

“We kept our hotel prices on the same level as last year and are very optimistic in regards to the summer season as bookings are in progress,” he added.

On the other hand, bookings took a plunge in central and east Zagori (-30 percent and -20 percent respectively) of the Ioannina Prefecture and Metsovo, Epirus (-40 percent).

The Ilia region, located on the west side of Peloponissos, seemed not to have been affected by the economic crisis as hotel occupancy reached 50-60 percent.

As for travel abroad, according to travel agents, this Easter Greeks opted for overseas destinations such as Dubai, Brazil, the United States and Israel but outgoing bookings were down some 25-30 percent this year (incoming bookings showed a small rise of some five percent).

Travel agents told GTP that “Greeks are holding back this year” in regards to travel abroad obviously due to the economic crisis.

In reference to the upcoming summer season, travels agents said that they expect a slight improvement in incoming bookings.

Mr. Trivizas added that a rise of 15-20 percent is expected in visitors from the U.S. but an equal increase in revenues appears unlikely.

On his part, the president of the Hellenic Federation of Hoteliers estimated that the decline in tourism revenues this year would reach a high single digit percentage (seven or nine percent) even if arrivals remain at last year’s levels.

“Last-minute bookings will have a negative affect on revenue,” Mr. Andreadis told GTP.

The federation’s president added that revenue would not have dropped so much if such a negative climate for Greece had not occurred around mid-February until mid-March “at a time when European markets began making summer bookings.”

Last year hotels lost 16 percent of their turnover -some one billion euros- so one can imagine the consequences if estimates of a further decline in 2010 are confirmed,” he concluded.