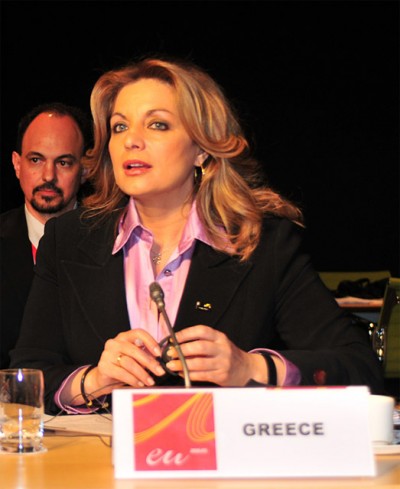 Greece is experiencing the most painful effects of the economic crisis but tourism could offer a way out, Deputy Culture and Tourism Minister Angela Gerekou stressed last month at the Informal Meeting of Tourism Ministers in Madrid, Spain.

“As a country we offer a very attractive tourist environment that responds in the best way to the various needs of the modern European traveler,” the deputy minister underlined.

Mrs. Gerekou called on European counterparts to contribute in Greece’s efforts to overcome the crisis through the promotion of tourism programs towards Greece for their population.

The deputy minister also made proposals for greater synergy in the field of tourism between the European Union Member States to the advantage of vulnerable social groups.

These proposals included easier procedures for granting European tourism visas to third country nationals (specifically from Russia, Ukraine, India, China and the United Arab Emirates) and the worldwide promotion of Europe as a tourist destination to the emerging tourist markets of Asia and the United States.

The aim of the Informal Meeting of Tourism Ministers was to preserve the European Union’s status as the world’s leading tourist destination.

The “Madrid Declaration” was approved at the meeting and included a series of recommendations to be adopted by the European Commission.

Special emphasis is to be made on the promotion of responsible tourism and moreover, sustainable tourism on an environmental, cultural and economical basis by means of the coordinated action of the E.U. with its Member States and the remaining international community.