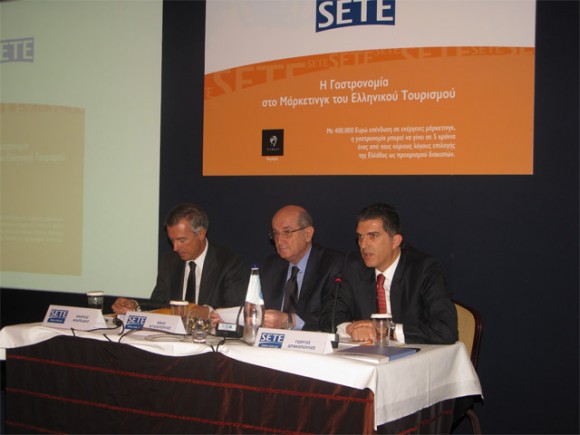 With a 400,000-euro marketing investment, Greek gastronomy over the next five years could become one of the main reasons to choose Greece as a holiday destination, the Association of Greek Tourism Enterprises (SETE) pointed out last month during the presentation of the study “Gastronomy in the Marketing of Greek Tourism.”

“Gastronomy is a very powerful form of tourism and until now no one has bothered with it,” SETE’s President Nikos Angelopoulos said.

Mr. Angelopoulos added that the association’s goal is for gastronomy to contribute to the attractiveness of Greece as a destination and “gradually reclaim the identity that the country once had but lost through time.”

“If the Culture and Tourism Ministry does not see to this soon SETE intends to look to implement the project entirely by the private sector,” he said.

“Gastronomy connects with all forms of tourism, weather its culture, conference, sea, health or city break,” according to SETE’s General Director George Drakopoulos.

He underlined that this “gastronomic patriotism” is in the sectors best interest as restaurants of local cuisine would receive free publicity.

The president of the Greek National Tourism Organization Nikolas Kannelopoulos applauded SETE’s initiative for the qualitative upgrading and enriching of the Greek portfolio of tourism services and products.

“I hope that the limited knowledge tourists have in regards to Greek gastronomy -Greek mouzaka and Greek salad- will be a thing of the past,” he said.

GNTO’s president said that he sees SETE’s study as a “bible” for a strategy to promote gastronomy tourism.