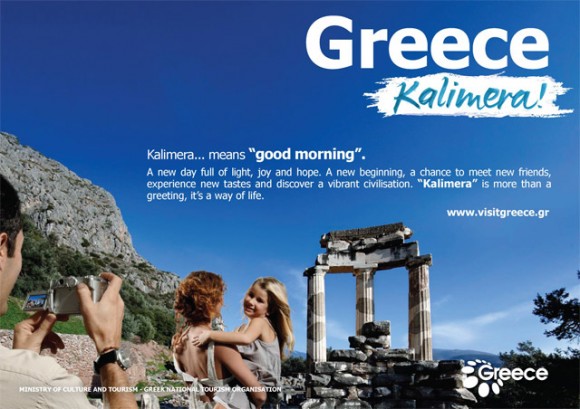 This year’s campaign was based on the existing material but was reshaped and redesigned with the addition of the slogan “Kalimera”. “Most importantly, its creation had no affect on GNTO funds,” the deputy minister, Angela Gerekou, said.

“Kalimera” (Greek for “good morning”) is the new slogan of the Greek National Tourism Organization’s (GNTO) international advertising campaign for the 2010 summer season.

“We chose to use a word that symbolically encapsulates everything that Greece is and everything that tourism is,” Deputy Culture and Tourism Minister Angela Gerekou said at the new ad campaign’s presentation held last month at the Hellenic Cosmos culture center “Theatron” in Athens.

The deputy minister underlined that the word “kalimera” shows the optimism of a new day, a cordial greeting, warm hospitality, the expectation of a memorable travel experience, sunlight and Greece’s amazing atmosphere.

“All these meanings can not be affected by any negative economic conditions and any difficult moment,” Mrs. Gerekou said.

She noted that the new ad campaign would be actively promoted through the Internet, as, “according to surveys, the web is the first source of information for travelers.

“Greece is completely absent as a country from this field,” she said and informed the audience in regards to the revamp of the Greek tourism portal www.visitgreece.gr.

During the presentation, Mrs. Gerekou said that special attention would be given this year to emerging tourist markets such as Russia, China, India and Latin America.

In regards to the GNTO’s debt to several American and European media from unpaid advertisements, the deputy minister said that payments of over 20 million euros have already been made. This year’s tourism campaign will cost roughly 12 million euros.