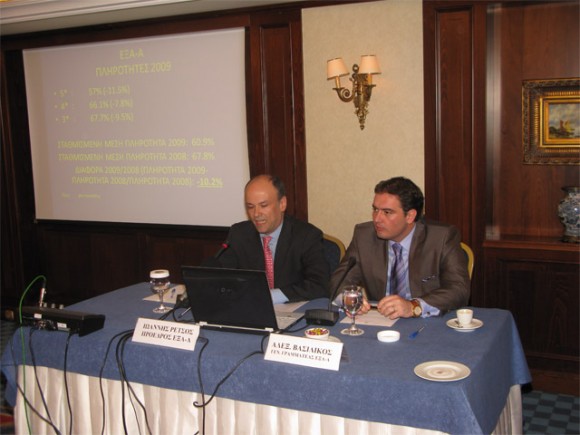 Athens-Attica Hoteliers Association President Yiannis Retsos and General Secretary Alexandros Vasilikos. During the press conference, Mr. Retsos said that the areas around Omonia Square are defined as some of the most dangerous places in Europe.

As a destination Athens is deteriorating and losing any grounds it had intended to gain and this ultimately cannot be considered a result of the global economic crisis, according to Athens-Attica Hoteliers Association President Yiannis Retsos.

Speaking at a press conference, the association’s president said that although hoteliers expect an increase in overnights from 2009 levels, lower revenue is expected, as travelers most likely would cut back on spending.

Hotel revenues fell 17.6 percent in 2009, compared with the previous year, with revenues of five-star hotels down 19.7 percent in the year.

“Any negative position of the capital’s tourism has a significant impact on the overall result of tourism nationwide…Hotel losses in Attica account for 14 percent of the total decline in Greece,” Mr. Retsos stressed.

During the press conference, he presented evaluations from a survey by GBR consulting that included forecasts made by the World Travel and Tourism Council.

“The possible loss of jobs at hotels in the Attica region (greater Athens) from last year’s slump could range from 3,580 to 3,750 positions, or some 25 percent of total workforce in the region’s hotel industry,” he said.

He then gave the audience simple examples of necessary actions/decisions that would enhance the competitiveness of the destination and bring more tourists to the city.

Once again the association urged the lifting of the cabotage law to enable foreign flag cruise ships to homeport in Greece.

“If the law is lifted, Athens could accommodate 300,000 cruise ship passengers annually, which would result to an additional hotel revenue of some 45,000,000 euros,” the president said.

The president also informed on the latest developments in regards to the delay in the transformation of the TaeKwonDo Olympic venue in Palio Faliro into a metropolitan conference center for Athens.

The creation of the conference center will be integrated in the overall redevelopment plan of the Faliro Bay and co-financed by the State.

In addition, the association’s president pointed out the need for “intelligent actions” for the international promotion of the country.

“A targeted promotion of the destination must take place through a long-term strategy to strengthen the capital’s brand name for it to emerge as a major European city break destination,” he stressed. (35,000,000 city break holidays are taken each year in Europe).

Mr. Retsos also underlined the association’s long-standing demand for the government to strengthen the security in Athens center so its reputation is not discredited worldwide from the acts of violence that are on the up.