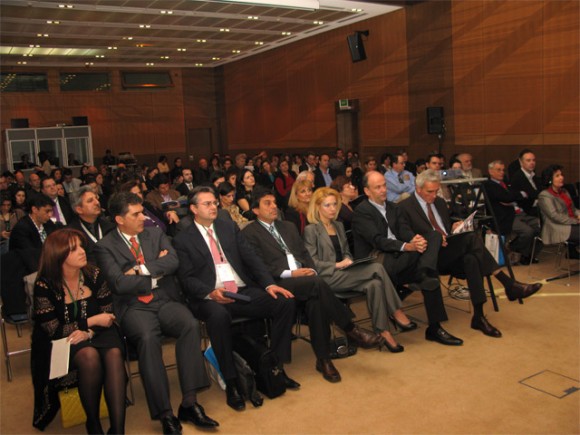 Advice to create proposals that sell, branding in the economic downturn, key issues for the incentive and meeting industry and suggestions for an improved promotion of the Greek tourism product were among issues discussed at the 6th International Meetings and Incentives Conference (IMIC), which took place last month in Athens at the Megaron Athens International Conference Center.

The agenda of this year’s IMIC, entitled “Creating and Managing Successful Products and Powerful Brands,” began with a presentation by Tassos Pappas (CITE), president of SITE Greece, entitled “Creative proposals and products: Keys for successful sales.” 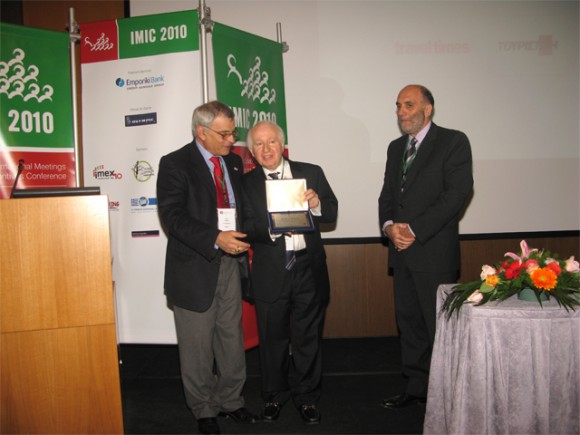 The IMIC-SITE Greece Award of Excellence was awarded to IMEX Exhibitions President Ray Bloom (center) for his contribution to the development of the industry.

Mr. Pappas advised tourism professionals to focus on the needs and goals of the potential client when writing up a proposal.

“A proposal must give the impression of a win-win situation… The client must understand that the proposition he is reading would be to his advantage,” Mr. Pappas said.

“Generally when writing up a proposal do not forget to K.I.S.S. (Keep It Short and Simple),” Mr. Pappas said humorously.

Of particular interest was the presentation of tourism and marketing consultant, Dimitris Koutoulas.

Once again the tourism specialist grabbed the audience’s attention and gave much food for thought in regards to tourism promotion within local government.

“By the looks of things there is no united national strategy for Greek tourism,” commented a tourism professional from the audience during Mr. Koutoulas’ presentation.

Entitled “Tourism and ‘Kallikratis’-Promoting tourist destinations at the local and regional level in light of the administrative restructuring of Greece,” the presentation enlightened the audience on the Greek government’s “Kallikratis” plan that foresees the number of municipalities to be cut by almost two-thirds.

Also included in the plan is the government’s intention to do away with the 76 prefectures that currently span the country and replace them with 13 larger regions.

“But what is the fate of the prefectural committees for tourism promotion?” Mr. Koutoulas wondered.

Prefectural committees for tourism promotion were established throughout Greek prefectures in 1993.

During his presentation, Mr. Koutoulas referred to the participation of municipalities and prefectures in local and international tourism exhibitions.

“Tourism exhibitions are the ultimate fetish of municipalities and prefectures… The committees spend so much money on exhibitions but go without proper planning and actually do not even know why they are there,” he said.
Mr. Koutoulas said that instead of “running to exhibitions,” prefects should use efficient techniques to promote their destination. 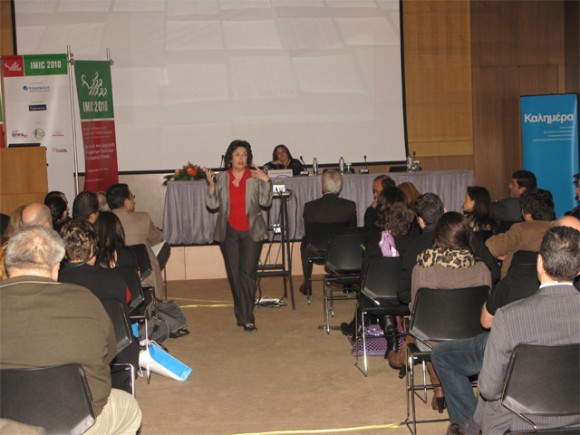 Certainly not a stranger to the IMIC conferences, as she is known for her lively presentations, Linda Pereira from CPL Events gave tips on how to “stand out of the crowd” and pass a positive image to colleagues and clients.

He then stressed that exhibitions are not the only way to promote Greece and that the current model of the prefectural committees for tourism promotion should be abolished.

“Perhaps the Kallikratis plan would be the opportunity for a new beginning and a chance for profes sional, rational planning and efficient use of funds to promote Greece as a tourism destination,” he said.

Mr. Koutoulas added that the contribution of the Culture and Tourism Ministry and the Greek National Tourism Organization is critical.

“They need to coordinate everyone, make provisions, give guidelines and adopt joint actions for an effective promotion,” he concluded.

The second day of the conference began with a presentation on the future of congresses from the perspective of a PCO (professional conference organizer).

Sissy Lignou, manager of AFEA Travel and Congress Services, spoke of the trends, the opportunities and the risks that come when organizing a conference.

“The meetings industry in Greece has a positive impact on the nation’s economy and contributes highly to the tourism industry,” Ms. Lignou said.

However, according to her presentation, the lack of governmental support, congress culture, facilities and a targeted promotion results to Greece’s exclusion from the top global congress destinations.

Also discussed at the conference was the current Greek tourism portfolio, which, according to George Drakopoulos, general manager of the Association of Greek Tourism Enterprises (SETE), “needs to change.” 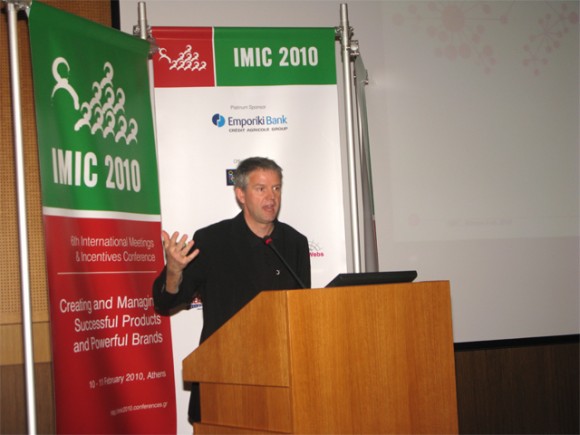 Of particular interest was the presentation by Padraig Cilligan of Ovation Global DMC who informed the audience that a crisis “is not necessarily a bad thing.”

“First of all we must decide what product to sell to which market as we can not sell the same to all markets,” Mr. Drakopoulos underlined.

SETE’s general manager also highlighted that Greece promotes various forms of tourism but can not support them to the full extent.

“Greece promotes sea tourism, but keeps on cabotaging; culture tourism, but then tourists find the Acropolis closed by contract workers; conference tourism, but a convention center is nowhere in the city,” he stressed.

Also during the second day of the conference two underestimated Greek tourism resources were presented: bird watching and walking tourism.

GTP was among the main communication sponsors of the 6th IMIC.