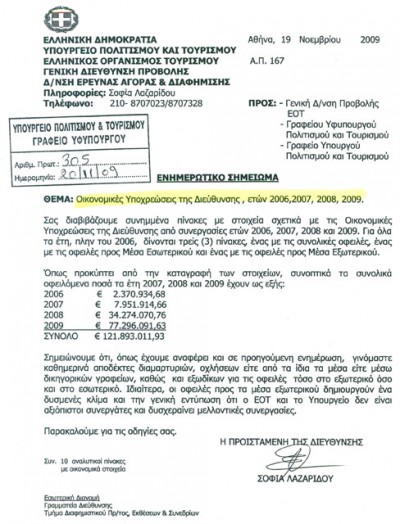 The official document delivered to Parliament by Deputy Minister Angela Gerekou that shows the total amount of the GNTO’s past debts to Greek and foreign media.

Organization, aim, control and effectiveness are the foundations on which today’s tourism leadership will operate, Deputy Culture and Tourism Minister Angela Gerekou said recently while addressing parliament during the debate on the 2010 state budget.

The deputy minister stressed that possibilities for the country’s promotion are limited, as money must be saved in order to arrange a repayment schedule to cover the Greek National Tourism Organization‘s debts to Greek and foreign networks.

The deputy minister told parliament that the tourism leadership’s goal is to fully take advantage of all tourism sector related programs that are included in the National Strategic Reference Framework (ESPA) that includes the amount of some 596 million euros.

Private Yachts To Be Taxed