Next year will not be an easy year as the recuperation from the global economic crisis may possibly be sluggish, said the UNWTO‘s Secretary General Taleb Rifai on the first day of the eighth annual Tourism and Development Conference of the Association of Greek Tourism Enterprises (SETE).

The conference was entitled “The role of tourism in changing economic phases: long term planning and operational readiness,” and took place on 19-20 October.

“Though decline rates are expected to ease during the remainder of 2009, international tourism is forecast to decrease by six to four percent this year,” stressed Mr. Rifai during his keynote speech.

The second day of the conference began with the speech of SETE’s President Nikos Angelopoulos who commented that Mr. Rifai’s speech spreads the message that “tourism is the vehicle for occupation opportunities and economic growth.

“This message is addressed mainly, if not exclusively, to our political leadership,” Mr. Angelopoulos said. He then refered to the tourism figures for the first nine months of the year, according to which arrivals appeared reduced by 7.5 to eight percent while revenues for January to August 2009 registered a decrease of some 14 percent. 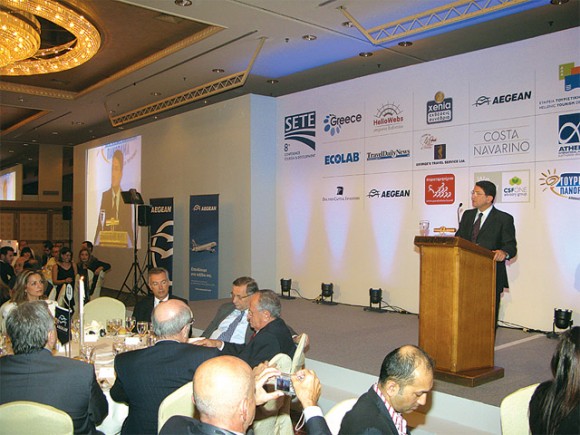 During SETE’s two-day conference, UNWTO’s Secretary General Taleb Rifai presented the Roadmap for Recovery, which was recently introduced at UNWTO’s General Assembly and endorsed by over 140 countries worldwide-Greece included.

SETE’s president refered to four “obvious” measures that should be implemented so Greek tourism enterprises and the country’s economy would avoid the worse case scenario of the global economic crisis.

He emphasized that the liquidity of all tourism businesses must be ensured, regardless of industry and size and he underlined the necessity of government coordination on actions that involve tourism development.

Third, he once again spoke of the transformation of the GNTO into an organization that promotes tourism based on the model of Visit Britain and Maison de la France. He then mentioned that the priorities of the new tourism leadership must include constant cooperation with the private sector.

The conference’s first session was entitled “Readiness and flexibility of the tourism economy” in which representatives of tourism associations from Cyprus, Spain, Egypt and Turkey gave their input.

“We are in a recession but we are getting out of it,” said Dr. Ghassan Aidi, president of the International Hotel and Restaurant Association.

Dr. Aidi advised Greek tourism professionals to “grab the attention” of the consumer and not just focus on selling to a tour operator.

On his part, the chief executive officer of Exeltur (Spain), Jose Luis Zoreda, advised Greek hoteliers not to alter their rate structure to attract tourists as “once the rates are reduced, they will be very hard to lift back up.” Mr. Zoreda proposed alternative incentives such as “freebies” in order to attract visitors.

“It is nothing for a hotel to offer free coffee for example or a free night if a visitor pays for three… Internet charge should also be dropped as the charges are ridiculous,” he said.

During the second session of the conference, the relationship between the tourism sector and the banking system was analyzed and experts exchanged views on the cooperation needed to form a new development model for the Greek economy.