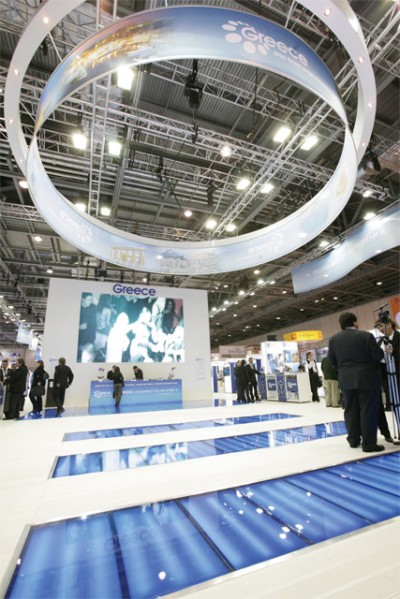 Travel and tourism, as an industry, has faced pandemics, natural disasters, escalating fuel prices and 9/11 but one of the World Travel Market’s greatest strengths is its ability to mirror the industry in its many moods, said WTM’s Chairman Fiona Jeffery at the tourism fair’s 30th Anniversary VIP Opening at ExCel in London, UK.

“It’s over these past two years, amidst the worst global economic downturn in living memory, the WTM has strived even more to help the industry with a different mountain to conquer,” Ms. Jeffery said.

Despite the global economic crisis, the WTM once again stood up to expectations and showcased an array of seminars, conferences and events during 9-12 November.

Greece’s presence at this year’s WTM fair was represented by 37 Greek tourism enterprises and local administration agencies in a pavilion of 800 square meters.

During the inauguration ceremony of the Greek pavilion, Deputy Culture and Tourism Minister Angela Gerekou underlined that despite the economic crisis, Greece can provide quality tourism services.

In the framework of her visit to the WTM the deputy minister gave a press conference to Greek and foreign media and outlined the key-points of the government’s new policy on Greek tourism. 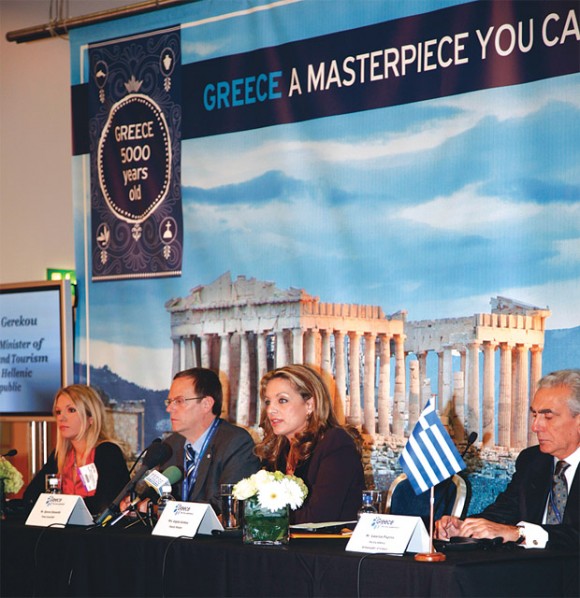 Deputy Culture and Tourism Minister Angela Gerekou briefed local and international media during the WTM. Once again the GNTO’s 128 million euro debt for advertising and promotional campaigns dating back to 2006 was mentioned.

Mrs. Gerekou said that the government is determined to cut through red tape, promote the development of green tourism, form a national strategic marketing plan and enrich, expand and upgrade Greece’s tourism product.
In reference to available data, Mrs. Gerekou said that last year Greece had a 1.6 percent share in the global tourism market with some 50 percent of visitors coming from five European countries.

“Given that international travel to Greece is carried out 80 percent through air travel, the expansion and improvement of Greece’s current airport network is included in the government’s plans of development,” she said.

Within the framework of the WTM, the deputy minister participated in the UNWTO Ministers’ Summit and also met with Eleni Cubitt, the honorary secretary of the British Committee for the Reunification of the Parthenon Marbles.

At this year’s WTM particular emphasis was given to the promotion of Athens as a cultural, educational, conference and city break tourism destination through the joint stand of the Athens Tourism and Development Company (ATEDCo) and the Athens-Attica Hotel Association.

IMIC 2010 Kicks Off This Month