SETE Looks Ahead For Greek Tourism 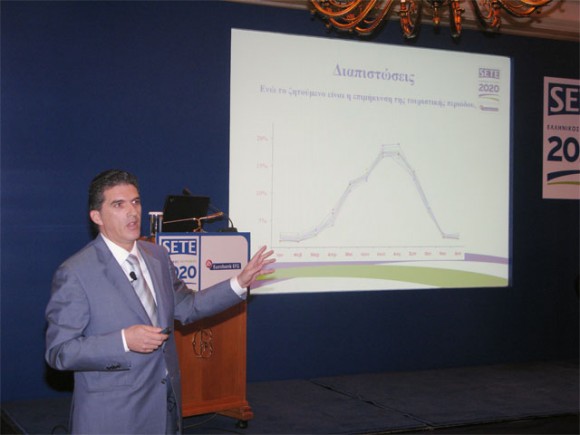 The Association of Greek Tourism Enterprises (SETE) recently announced that it is preparing the study “Greek Tourism headed for 2020,” which will include the strategy for building a new development model for Greek tourism. The sole sponsor and supporter of this initiative is Eurobank EFG.

At a press conference, SETE and Eurobank analyzed the objectives and perspectives of Greek tourism along with the role the banking system would play to form the new strategy until the year 2020.

“Tourism is the sector in which Greece has unquestionable comparative advantages -culture, natural environment, climate- and produces approximately 18 percent of the country’s GDP,” said Nikolaos Nanopoulos, CEO of Eurobank EFG.

Mr. Nanopoulos underlined that the cooperation established with SETE is a chapter of the many initiatives undertaken by Eurobank to support the new development needs of the Greek economy.

“The Greek tourism 2020 study intends to improve competitiveness and present a series of development proposals through an open dialogue that will aim to ensure a broader consensus to the guidelines and objectives of the Greek tourism policy,” he said.

According to Mr. Angelopoulos, the results of the study will be announced at the end of 2010.