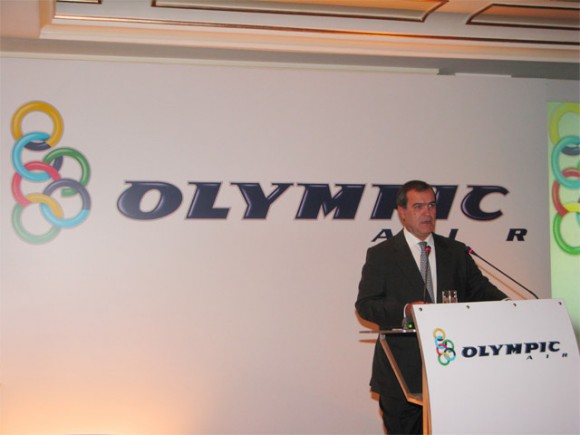 “Greece is high above,” was the slogan of Olympic Air’s press conference held last month in regards to the launch of operations of the new and privatized Olympic that replaces the loss-making state carrier Olympic Airlines.

MIG President Andreas Vgenopoulos presented the business plans of Olympic Air and announced that the carrier would begin flights as of 1 October with a fleet of 21 new aircraft, which would rise to 25 by 1 November and gradually expand to 32 under an investment plan that exceeds $1.1 billion (750 million euros).

Under the current planning, Olympic Air will operate a fleet of 32 aircraft of which sixteen are Airbus 319 and 320, 10 Bombardier Q400, five Bombardier Dash 100 and one ATR-42.

Mr. Vgenopoulos underlined that the new airline would offer an excellent service, be highly competitive and surely add to Greece’s tourism growth.

“The aim of Olympic Air is to develop into an undisputed leader in the domestic market, have a leading position in European aviation and -‘why not?’- even become one of the largest airline companies in the world,” he said.

Mr. Vgenopoulos mentioned that according to the requirements of the European Union, Olympic Air is allowed to perform only 65 percent of the flight operations program of Olympic Airlines.

This condition led the carrier to code sharing agreements with other airlines in order to cover transatlantic routes once flown by the “old Olympic” (New York, Toronto, Montreal, Australia, Johannesburg, Atlanta and Abu Dhabi).
“In only a short time we managed to form a strategic partnership with Delta Air Lines, Air France/KLM, Etihad Airways and Cyprus Airways,” said Antonis Simigdalas, the chief executive officer of Olympic Air.

According to Mr. Simigdalas, Olympic Air has already signed an agreement with Delta Air Lines to code share flights to New York as of this month while other destinations are to follow by early 2010.

Code sharing deals of Olympic Air with Air France/KLM and Etihad Airways for the remaining destinations are almost completed. “The result of these agreements will be a new Olympic that will support Greek tourism and economy,” he added.

In regards to the tender for the 24 state-subsidized routes (agones grammes) Mr. Vgenopoulos said that Olympic Air would take part once the tender procedure is announced. A tender was called off last month due to the 4 October elections. Olympic Air’s strongest competitor is said to be Aegean Airlines.

MIG President Andreas Vgenopoulos slammed Aegean Airlines for announcing the launch of its Thessaloniki-Istanbul route from the moment that “there is a bilateral agreement in place based on which Olympic Airlines had the exclusive rights to fly that route.”

According to Mr. Vgenopoulos, Aegean Airlines launched the route on the basis of a memorandum of understanding that was “discretely” signed between a Greek delegation (Foreign Ministry and Civil Aviation Authority representatives) to Turkey while the Transport Ministry was never informed about it.

“Who knows what other ‘discrete’ agreements were made by Aegean Airlines in the past at the expense of the then state-carrier Olympic Airlines?” he wondered.

In an announcement, Aegean Airlines welcomed Olympic Air to the aviation field and underlined that in regards to the Thessaloniki-Istanbul route all procedures were according to Greek and European regulations and in line with the expansion of routes and frequencies, the number of carriers and the development of tourism between Greece and Turkey.