Greek Tourism Up Against “Cold” Winter 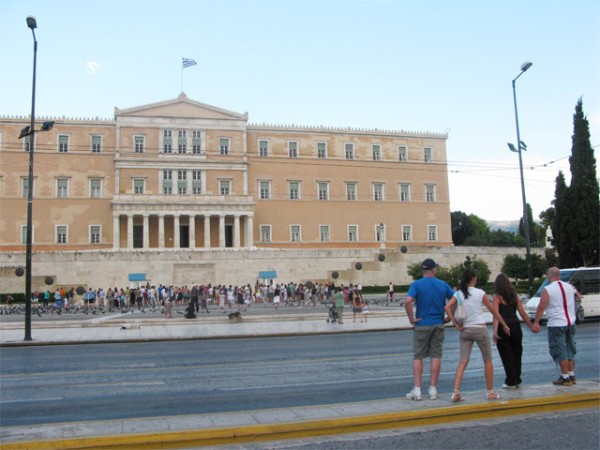 Foreign arrivals at Greek airports fell nine percent year-on-year in August while the number of foreign visitors in Greece dropped 8.5 percent in the first eight months of the year, the Research Institute for Tourism and Forecasts (ITEP) recently said. The institute sees airport arrivals falling 10 percent in 2009 and hotel sector revenues down 16-18 percent in the same period.

ITEP noted that the drop in arrivals is due to longstanding structural problems of the economy and the tourist sector as well as the global financial crisis.

Travel agents told GTP that judging from this summer’s tourism traffic the year in general would continue on a difficult pace and could possibly lead to a catastrophic situation for the Greek tourism industry.

Up until now, foreign arrivals to Greece has had its share of ups and downs as, according to official figures, the January-June period saw a drop of 9.6 percent, which then fell to eight percent in the January-July period.

According to Mr. Ginis the situation would continue to be bleak during the winter season as the new influenza A(H1N1) outbreak is an addition to the list of problems (economic crisis, the December 2008 riots and the degradation of central Athens) that have slowed down Greek tourism on all levels.

The President and CEO of Athens-based Dream Travel, Stavros Bouzanis, agreed with this as he told GTP that what struck outgoing tourism was not so much the economic crisis but mainly the catastrophology that spread throughout the industry in regards to the threat of the influenza A(H1N1).

“The swine flu frenzy caused a major drop in bookings to the Latin American and Cuban markets but reservations to exotic destinations such as the Maldives, Thailand and Bali were on a satisfying level,” Mr. Bouzanis said.

He also added that his travel agency had special offers this year for international travel but what helped matters were the additional offers made by airline companies and hotels abroad. “Our customers received very good deals and took them,” he said.

As for incoming tourism, Mr. Bouzanis said that traffic from the markets his agency mainly deals with (Turkey, Spain and the U.S.) went slightly better than last year.

“Generally there was a reduction of incoming tourism in Greece but I personally believe it to be manageable,” he said.

Travel agents underlined that they expect more from the Greek National Tourism Organization and the Tourism Ministry in regards to Greece’s promotion abroad.

“The government changed the tourism minister during a very crucial period and replaced him with a minister that had never dealt with tourism before… everything then slowed down,” the manager of Athens-based G.E. Travel, Elena Grapsa, stressed to GTP.

“The GNTO must create a more targeted promotion of Greece through a more successful advertising campaign…This year’s was a failure, from the slogan to the general concept,” she stressed.

When asked what her impressions were judging from Greece’s tourism traffic during the summer, Mrs. Grapsa characterized 2009 as “the worst year ever due to the economic crisis.”

With foreign arrivals down 8.5 percent for the January-August 2009 period it was asked whether or not domestic tourism somewhat covered the gap at least in terms of contributing to overnight stays and hotel revenues as many Greeks were said to have “vacationed at home” this year due to the crisis.

ITEP released data in the beginning of September that showed that the overnight stays of Greeks recorded significant reductions, which in some cases exceeded 20 percent (see page 8) while ferry ticket sales had increased.

Ferry tickets sold very well but we have no clear picture about hotel bookings as many of our customers refused to make reservations due to the high prices.

According to data from the Piraeus Port Authority, from 1 July to 9 August passenger movement increased by 5.78 percent over the same period last year.

Maria Hatzigiannidi-Izabel, tourism consultant of Athens-based Palmos Travel, verified that many Greeks did in fact “stay home” and vacation domestically but cut their vacation days and expenses.

“Greeks certainly traveled this year according to ferry and airline ticket sales but they did not reside in hotels, as they considered prices too high,” Ms. Hatzigiannidi-Izabel said.

According to Ms. Hatzigiannidi-Izabel potential customers would enquire about all-inclusive packages and hotel prices, consider them too expensive and end up booking transportation tickets only.

Fenia Efthimiou from the reservations department of G.E. Travel agreed with this.

“Ferry tickets sold very well but we have no clear picture about hotel bookings as many of our customers refused to make reservations due to the high prices,” Mrs. Efthimiou told GTP.

“The hotel owners did not appear to realize the situation…The majority did not make discounts,” she said.

However, the Research Institute for Tourism and Forecasts (ITEP) said that the low prices offered by hotels were among the main reasons for the high revenue loss. The Bank of Greece said last month that tourism revenue fell 15.5 percent in the January-July period, compared with the same period in 2008.

Also, according to travel agents, many Greeks took advantage this year of the special offers of cruise trips to destinations abroad.

“The economic crisis played a big role in the change of heart from the Greek side as discounts reached up to 50 percent,” she said.
Ms. Galanou added that Greeks appreciated the fact that they knew exactly what they were paying for through the all-inclusive offers.

“This way they easily arranged their budget before their vacation, something that would be difficult to do if they stayed in a hotel,” she said.

According to Ms. Galanou, Greeks took cruises mainly to destinations in the Baltic Sea, the Mediterranean and Alaska.

In regards to what to expect in 2010 for the Greek tourism sector travel agents replied that they just “hope for the best.”

Mr. Ginis of Ginis Vacances said that the state must get involved as “tourism is suffering and structural changes are needed along with a valid and timely advertising campaign.

“The GNTO and the Tourism Ministry must make improvements on our tourism infrastructure, our airports and our ports so our visitors will be satisfied and want to return…Everything else will fall into place because—let us not forget—Greece is a very beautiful country,” he said.

Mr. Bouzanis of Dream Travel, however, believes that the GNTO and the Tourism Ministry should take the situation further than that and follow the Spanish model in regards to tourism promotion.

“In Spain they not only include those directly involved in tourism but they promote every aspect of the country…Greece could do this too, whether that aspect is “Greek cuisine,” “Greek jewelry” or even “Greek casinos,” he concluded.