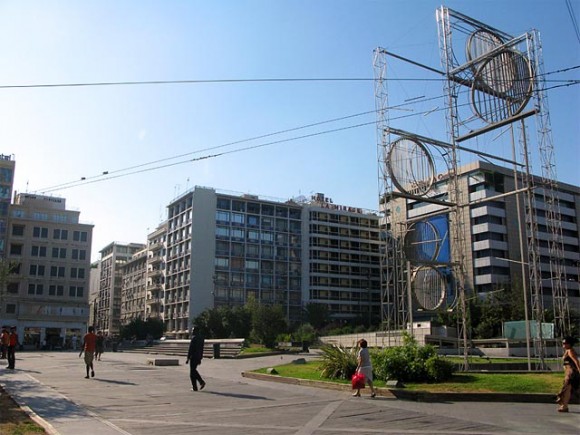 The infamous Omonia Square in the center of Athens.

Drug dealing, public drug use, trafficking, muggings and clashes that involve illegal immigrants have degraded one end of the historic center of Athens-the Omonia Square area-to the extent that local hotel reservations in the area have been affected up to 40 percent, Athenian hoteliers recently told GTP.

Athenian tourism professionals are calling on to the state to finally take action as tourists are avoiding hotels near Omonia Square and neighbor streets such as Pireos, Agios Konstantinos, Evripidou, Geraniou, etc.

“It is unacceptable for the center of Athens to be in such a state,” a local hotel manager near Omonia square (whose identity is withheld upon request) told GTP.

“In 2004 Athens was one of the safest destinations in the world and five years later we have allowed it to be the most dangerous,” he said.

According to the hotel manager, illegal prostitutes, drug addicts and illegal immigrants have labeled the city center as “unsafe” and a “ghetto” and as a result tourists are cancelling their reservations.

“The prostitutes hang out in front of our hotels waiting for customers, illegal immigrants lurk everywhere, while in broad daylight drug addicts buy narcotics and shoot up in front of passer-bys…These are not sights that tourists should see,” he stressed.

Athenian hoteliers have resulted to charging rooms at extremely low prices this way giving customers the opportunity to at least have a low budget vacation in a well-serviced hotel despite the poor neighborhood surroundings.

From Omonia Square and on Athens suddenly transforms into another kind of tourist city and the hotels in the area pay the price,” Mr. Tzikas said.

As for this summer’s police “sweep” operations in key areas of the city center the hotel manager said that nothing really has changed.

“The drug addicts and illegal immigrants just switch streets in Omonia after the ‘sweeps’…Drug addicts are still hanging out on the steps behind City Hall after hours,” he commented. Athens City hall is located on commercial street Athinas only a block away from Omonia Square.

Another local hotel manager, Alexandros Arapakis, recently told a Greek newspaper that he is taking legal action against the Greek public sector and the City of Athens in demand for compensation due to his hotel’s continuous loss of revenue as a result of the city’s degradation.

Meanwhile, the general manager of Novotel Athenes Hotel, Evripides Tzikas informed GTP that the Novotel’s reservations have not been affected by Omonia’s reputation, particularly because the hotel is not located in the heart of Athens. The Novotel is relatively close to Vathis Square in the center of downtown Athens.

“From Omonia Square and on Athens suddenly transforms into another kind of tourist city and the hotels in the area pay the price,” Mr. Tzikas said.

“Certainly our location is not in the best area…We are close but not so close so as to be affected,” he said.
According to Mr. Tzikas safety has never been an issue for his hotel guests.

“We have had a few cancellations of scheduled meetings and conferences but no booking cancellations,” he said.

“In general though this image of the city center is causing damage to the tourism sector,” Mr. Tzikas concluded.

Emmanuel Kardamis, manager of a hotel chain in the center of Athens, claimed that despite the police sweeps in July and August the problem has remained.

“Athens has gotten a bad name in regards to muggings and pickpockets,” he stressed.

Mr. Kardamis told GTP “it is a ‘massacre’ for anyone walking the city streets or just using the public transport” since visitors and Greeks are frequently robbed.

When commenting on the eviction of squatters (illegal immigrants and drug addicts) from abandoned buildings in the city center, namely the former Athens Appeals Court (Socratous Street) and the former Apollon Hotel (Deligiorgi and Pireos streets), Mr. Kardamis said that “the problem has not been solved.

“Now the drug addicts just wander the streets and frighten tourists…The authorities must organize a general ‘sweep’ operation and remove them from the city center,” Mr. Kardamis underlined to GTP.

In regards to bookings Mr. Kardamis said that cancellations are made either upon the arrival of guests or even before they fly to Greece.

“Everything is posted on the Internet…Tourists that have already stayed in Athens transfer their impressions on to blogs thus influencing other travelers who already have made reservations…This results to them canceling their bookings due to Athens’ bad image,” he said.

“Tourists come to Athens, see this mess, stay the night and then leave the next day,” he said.