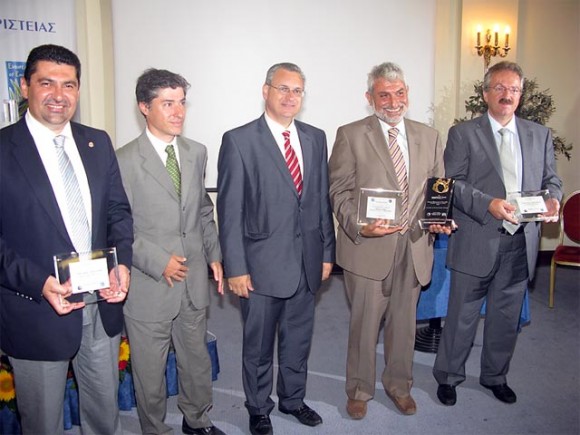 Tourism Minister Kostas Markopoulos honored the prefecture of Lesvos at an event in Athens after the island recently received the award for top sustainable tourism destination in Greece for 2009 in the European Commission’s third “European Destinations of Excellence” (EDEN) project.

This year’s EDEN theme focused on “tourism and protected areas” and Lesvos was chosen for the protected area that surrounds its Petrified Forest.

Mr. Markopoulos underlined the general advantages that the EDEN recognition offers Lesvos and announced that the tourism ministry would finance the creation of a marine park in the area located near the petrified forest.

The tourism minister also awarded the two Greek destinations that had previously won the EDEN award. 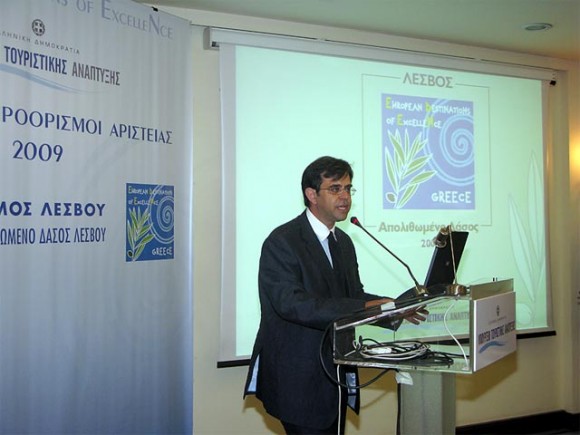 Nikos Zouros, director of the Natural History Museum of the Lesvos Petrified Forest, refered to the open-air parks on Lesvos: the petrified forest park, the Sigri park and the small island of Nisiopi.

“This event has a symbolic significance as its purpose is not only to honor Lesvos, Florina and Grevena but also to promote quality and unknown Greek tourism destinations,” said Mr. Markopoulos.

Following the ceremony, presentations of the awarded areas took place and speakers gave insight on the value, diversity and common characteristics of the “emerging destinations.”

Nikos Zouros, director of the Natural History Museum of the Lesvos Petrified Forest, presented monuments of nature and spoke of the island’s culture.

He refered to the striking findings the museum houses along with the network of paths and places of recreation on Lesvos.

Located in Sigri, the Natural History Museum depicts finds from the island’s petrified forest and explains the geological history of the evolution of the Aegean, from the processes that led to the creation of the petrified forest 20 million years ago up to the present-day ecosystems.

Tourism Minister Kostas Markopoulos announced that the tourism ministry would finance the creation of a marine park in the area located near the Petrified Forest on Lesvos Island.

Next, Grevena prefect Dimosthenis Kouptsidis spoke of Grevena’s comparative advantages, the regions development course and the actions taken by the prefecture in the direction of sustainable tourism development.

Mr. Kouptsidis underlined the latest developments in regards to the construction and operation of the star observatory on Mount Orliakas.

Geology professor Evangelia Tsoukala then took the stand and spoke of Grevena’s second innovation that is sure to contribute to the region’s tourism development: the paleontological center in Milia.

In addition, Dr. Zeta Rizou, managing director of the Florina development agency, gave a presentation on the prefecture entitled “Florina, a destination of great natural beauty.”

Ms. Rizou gave insight on Florina’s alternative forms of tourism and referred to the prefecture’s two of the biggest mountaineering European paths, the E4 and E6. The E4 and E6 paths were praised when Florina received the EDEN award in 2007.

Next year’s theme of excellence for 2010 is “Aquatic Tourism” and the winning destinations will be rewarded with the title “EDEN destination for its Aquatic Sustainable Tourism Offer.”

The quest is for those tourism coastal, lake and riverside destinations that promote innovative approaches for their aquatic tourism offer in such a way so as to develop a more qualitative environment, to cope with the seasonality issue and to rebalance the tourism flows from the most famous and crowded tourism destinations.