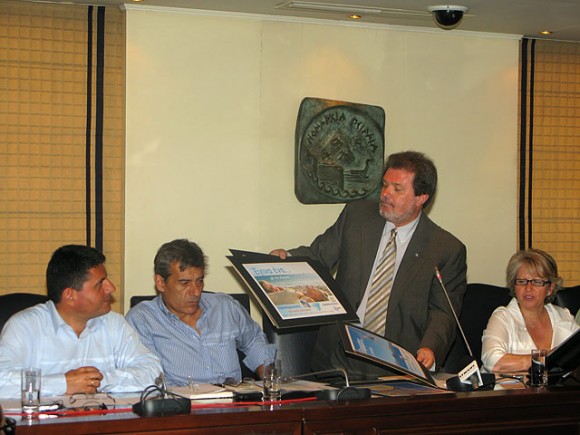 Piraeus Prefect Yiannis Michas shows the audience the prefecture’s 2009 promotional campaign that flaunts the slogan “Turn to the Argosaronic Gulf.”

The Piraeus Prefecture recently held a meeting that focused on tourism and ways to deal with the economic crisis in the areas and islands within its jurisdiction.

The meeting was attended by representatives of the 16 municipalities in the area of responsibility of the Piraeus Prefecture.

Piraeus Prefect Yiannis Michas referred to the key pillars on which the prefecture’s tourism policy stands for the past six years.

One of the main issues on the agenda was the 840,000-euro budget for 2009 tourism promotion approved by the prefectural committee.

At this point, Mr. Michas criticized the government’s stance as the Greek National Tourism Organization has yet to decide the amount it will cover for the programs of the 2009 tourism promotion of Greek prefectures.

“We are already half into 2009 and no decision has been made and the GNTO still owes us from last years promotional campaign,” he added.

The prefect also noted that the tourism policy of the Piraeus prefecture includes green development.

“Studies are underway in regards to the creation of a diving park in the Saronikos (a municipality in Corinthos) and for the energy independence of Agistri Island,” he said.

The prefecture will also proceed to upgrade the wetlands of the Psiftas (Trizinia province), while plans for its transformation into an environmental education center for schools was also mentioned.

Another measure the prefect spoke of was the creation of a tourist stand opposite the point from where ships depart for the Argosaronic Gulf at the Piraeus Port.

“Information on the islands will be provided from the stand, which will also be available for the promotion of material of municipalities and tourism professionals,” he said.

On the matter of shipping the prefect said that he was disappointed with the leadership of the Ministry of Mercantile Marine, The Aegean and Island Policy in regards to the current state of sea transport for the Argosaronic Gulf, which continues to be inadequate.

“High fares remain despite the decline in fuel prices, the sea routes are not met adequately and the Hydra and Spetses itineraries are still exclusively covered by high speed vessels despite our protests,” the prefect stressed.

Mr. Michas underlined that the cost to these two destinations for a round-trip journey per person could reach up to 70 euros.

OTEK Students Get One Year Free