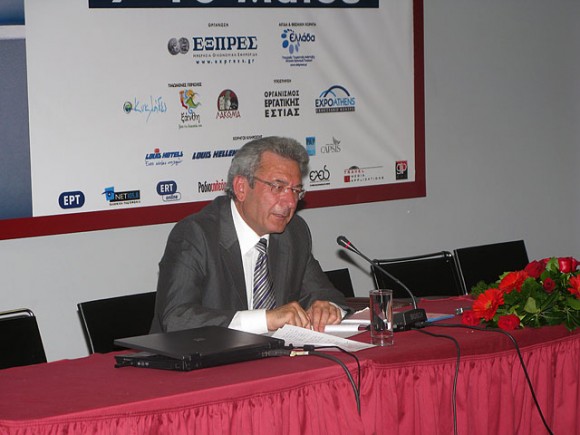 During the press conference, prefect Dimitris Bailas was questioned if the prefect interferes with the prices of hotels and tourism services of the Cyclades. “We do not pressure or give orders to anyone…At the end of the year those responsible will judge for themselves whether or not to adjust their actions.”

The Cyclades holds the first place throughout Europe for the internationally known ‘sun and sea’ elements but so many other essentials compose the group that are unknown to most, according to the island group’s Prefect Dimitris Bailas.

Speaking at a recent press conference entitled “Nature and Culture of the Cyclades – Opportunities for Tourism Development” Mr. Bailas presented the pillars of the prefecture’s tourism policy.

During the press conference, Mr. Bailas attempted to lift the Cyclades’ reputation that suggests a natural environment limited to sandy beaches, rough hills and rocky landscape.

“Visitors can see all of the Cyclades’ unknown beauties through the “Cultural Paths of the Cyclades,” a project the prefecture has been preparing over the past 10 years and which includes the restoration of old paths on the islands,” the prefect said.

According to the prefect, the prefecture already has established paths on Andros, Tinos, Kea, Kythnos and Amorgos, while paths are being prepared on Syros, Naxos, Donousa, Sifnos and Milos.

At this point Mr. Bailas emphasized that treks on the paths could be combined with religious tourism, a form that is in the prefectures’ plan for promotion. The prefect also made reference to designed marine paths throughout the Cyclades that include routes to a number of islands.