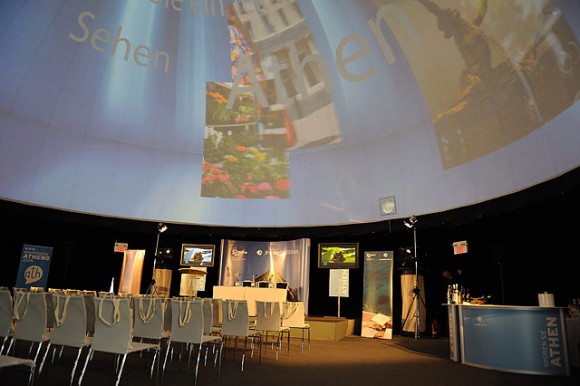 The interior of the World of Athens sphere.

The first World of Athens roadshow, part of a series of international events of an extensive advertizing campaign for the promotion of Athens, took place at Potters Fields Park in London on 22-25 May.

Some 280,000 visitors flocked to the World of Athens sphere, which resembled a dome and got the insight on Athens through videos, images and graphics depicting the history and culture of the Greek capital.

Admission was free to the public and during the four-day event visitors were treated to performances by Greek dancers and musicians.

From London the second roadshow “parked” at the La Defense Square in Paris on 29 May-1 June and its third stop was Leipzeiger Platz in Berlin 5-8 June.

The roadshow then left Europe and traveled to the U.S.

On 12-15 June the event took place at the World Financial Center in New York and the World of Athens roadshow closed with a last stop at Chicago.

Tourism Among Priorities On PM’s Agenda