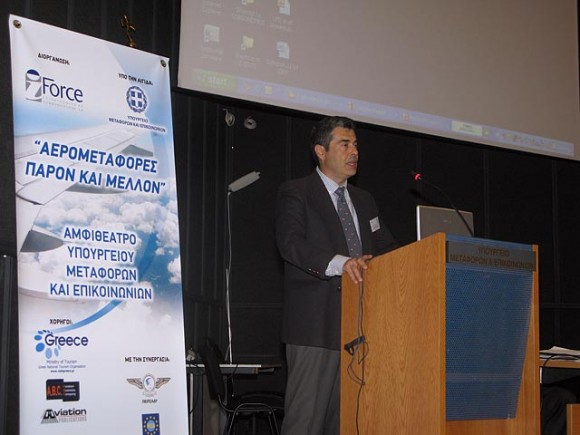 Police Captain John Siriopoulos of the Hellenic Police Flight Department stressed that necessary legislative rules have been made for the improvement of Greek aviation but that economic assistance from the government is still pending.

Greece’s aviation laws must correspond with those of European legislation and of the international market if the country wants to attract aviation tourism, was the main conclusion of the fourth scientific conference “Aviation – Present and Future,” held by the Hellenic Ministry of Transport and Communications.

Deputy Minister of Transport and Communications Mihalis Bekiris underlined that Greece is a country comprised by islands and mountainous complexes where 75 percent of the tourist traffic moves by air.

“This makes air transport an important role in the development of tourism and the national economy,” he said.

Police Captain John Siriopoulos of the Hellenic Police Flight Department, underlined that private aviation tourism is a form of tourism that is not affected by the global economic crisis.

“Of course, to attract this sort of high quality tourism to Greece we should have adequate aviation facilities,” he said.

Yiouli Kalafati, president of the Aircraft Owners and Pilots Association of Greece (AOPA-Hellas), presented the image of general aviation in Europe with specific statistics and spoke of the current situation in Greece.

According to Ms. Kalafati, Greece has more than 40 regional airports and excellent weather conditions but ongoing problems halt any process of aviation tourism from even starting.

The main problems focus on the bad management of Greek airports, the outdated legal framework, the lack of state policy, the refuelling laws of private aircraft and the spatosimo tax charge (12 euros per passenger).

Ms. Kalafati stressed that among solutions is the better planning for the most advantageous use of the capacity of regional airports, along with the development of modern technologies such as the use of electronic Aeronautical Information Publications (AIP). Greece is the only European country that does not use electronic AIP.