The Association of Greek Tourism Enterprises painted a black picture at a press conference last month and called on to the government for additional measures to support the tourism industry.

The association’s president, Nikos Angelopoulos, referred to the proposition he made to Finance Minister Yiannis Papathanasiou that sees tourism enterprises receiving financial support by banks in the form of government bonds.

According to the association’s president, such a measure would contribute to the improvement of the industry’s competitiveness, which right now is up against attractive prices of destinations outside the eurozone (e.g. Turkey and Egypt).

Other measures discussed with the finance minister were a VAT reduction for tourism services by three percentage points and a 75 percent reduction of an airport duty for regional airports.

The finance minister said he would consider the issue of financing tourism enterprises through government bonds and the reduction of the airport duty.

However, a possible VAT reduction (a measure that Cyprus adopted for tourism enterprises), was not discussed. 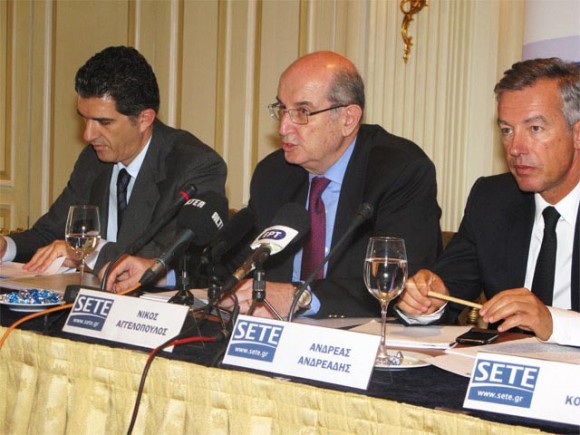 SETE’s president, Nikos Angelopoulos, expressed his frustration and disappointment towards the attitude of Emporiki Bank, which he said would not accept checks issued by tourism businesses, suggesting that thy are not creditworthy. In a release Emporiki Bank denied this and expressed its support for the tourism sector.

Mr. Angelopoulos and the president of the Hellenic Hotel Federation, Andreas Andreadis, criticized the banks stance in regards to their refusal to approve loans to tourism enterprises (see page 8).

As for hotel prices, Mr. Andreadis said that they currently are at 2004 levels and in many cases have dropped up to 20 percent when compared with 2008.

He said that the insistence on reckless price reductions would lead competition to the wrong level as it would affect the quality of services and reduce employment.

In regards to “rumors” that Greek tourists pay more than foreigners are charged, Mr. Andreadis characterized this as “untrue” since the majority of Greek hotels have websites with their prices.

“Unfortunately, Greeks do not conduct online searches to compare prices,” he said.

In addition, Mr. Angelopoulos reported that after the key international tourism fairs in Berlin and Moscow, and following the end of the early booking period, the estimations of tourism demand in 2009 lead to a reduction of arrivals by 20 percent compared with 2008.

According to the association’s president, if this drop is not limited it is likely to result in three million less tourists, which translates to some 2.3 billion euros less in revenue. He underlined that such estimations see the loss of thousands of jobs.

Mr. Angelopoulos also added that tourism is not just lodging as of the same importance are travel agencies, marine tourism, airport handling and car rentals.

He referred specifically to marine tourism that “has by far the most competitive advantages but its importance is systematically and unnecessarily overlooked by the state.”

Once again the necessary abolition of the cabatoge law (legislation that forbids non-European flag ships to use Greek harbors as homeports) was mentioned.

“The government does not realize that 90 percent of cruise passengers combine their vacation with hotel stays and spend a significant amount of money for daily purchases, archaeological site visits, restaurants, etc,” he said.